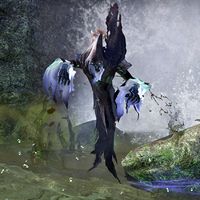 Wraiths are ghost-like undead monsters who attack using frost magic. They are usually found haunting graveyards and tombs. Wraiths with red robes can be found in the Alessian Tombs.

Nerien'eth turns his former students into wraiths during battle.

As they are considered undead creatures, wraiths are especially vulnerable to Fighters Guild abilities.

Chill
Ice Bolt
A basic ranged attack that does minor frost damage.
Winter's Reach
The wraith releases frost in the direction it is facing. This attack does moderate frost damage and roots all players hit by it. This spell can be interrupted to set the enemy off balance or simply avoided. 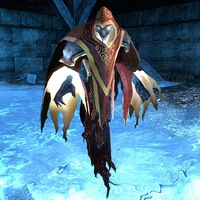 A Wraith in the Alessian Tombs

This Elder Scrolls Online-related article is a stub. You can help by expanding it.
Retrieved from "https://en.uesp.net/w/index.php?title=Online:Wraith&oldid=2682887"
Categories:
Hidden categories: