The final Ansei Ward has been tracked to the Motalion Necropolis. I must help Prince Azah recover the Ward and put an end to the Withered Hand's plot.

Meet Talia at the entrance to the Motalion Necropolis to hear the bad news: Prince Azah and Throne Keeper Farvad have both been captured, and with them, the two Ansei Wards you've already recovered. You'll have to go in after them and stop Shiri.

Fight your way through the hordes of Ra-Netu and Withered Hand cultists. You'll come upon two small side tombs, each consisting of two small chambers. You'll find Prince Azah tied up in the first tomb. Free him, go through to the next chamber, and discover that Shiri has managed to release the now-undead Alasan (whom you defeated at Tava's Blessing by imprisoning him within the sword) from Ansei Maja's ward. Defeat him and recover the Ward. This time, it is conveniently undamaged.

In the second tomb, Throne Keeper Farvad is also tied up—a thing which bothers him less than the fact that he apparently struck down one of the undead himself, which is taboo. Nevertheless, he must come with you into the next chamber, because the Ward of Ansei Radan has been corrupted, and he is needed to purge it. You'll keep several waves of undead enemies off his back while he does this. Unlike Alasan, you will not have a second confrontation with Uwafa.

Finally, you must make your way down to the central tomb. You now have three friends with you: Throne Keeper Farvad, Prince Azah, and Talia at-Marimah. Two of them will have to stay behind to cast a spell, dispelling a barrier that Shiri has set upon the door. You will be allowed to take the third with you into the tomb. Azah is a sword-wielding warrior who will tank for you, Talia is an archer, and Farvad is a healer. Take your pick and head into the tomb.

After a last few bandits you'll have a fight with Shiri, who has revealed herself to be a powerful necromancer, and is hell-bent on resurrecting her father, Suturah: the leader of the original Withered Hand insurrection of some decades ago. As you come close to killing her, she will give the rest of her life force to resurrect Suturah as a lich. He is a far more powerful necromancer than Shiri. Beat him down and the threat of the Withered Hand is finally over: you can collect the third and final Ward, then talk to Ansei Halelah, first inside and then outside the tomb. She will create a portal that takes you back to the Impervious Vault to end this quest and start the next one: Restoring the Ansei Wards. 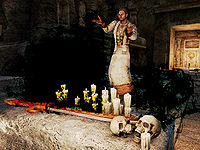 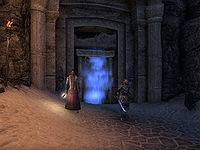 Farvad and Azah wait in the Necropolis 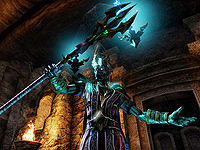 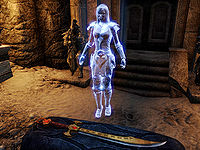 "To all things, there is a beginning and an end. Remember this."

This Elder Scrolls Online-related article is a stub. You can help by expanding it.
Retrieved from "https://en.uesp.net/w/index.php?title=Online:Amputating_the_Hand&oldid=2491622"
Categories:
Hidden categories: