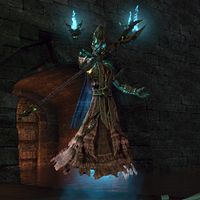 Garron the Returned is a lich found within Wayrest Sewers II. It serves as the second boss that players must defeat to progress.

As a boss type enemy, Garron is immune to all forms of crowd control effects. As an undead creature, Garron is especially vulnerable to Fighters Guild abilities.

The boss launches many skulls that impact the ground around itself, as indicated by red circles. This attack does moderate magical damage.

The boss summons four lich crystals around the room that do moderate magical damage as indicated by red circles. After the crystals explode, Escaped Souls are summoned at their positions. The party should kill these as soon as possible to simplify the fight.

The boss teleports to the center of the room and fires beams at all players. This attack does high magical damage over time and has to be healed through.

Garron the Returned is associated with two achievements.

This Online-related article is a stub. You can help by expanding it.
Retrieved from "https://en.uesp.net/w/index.php?title=Online:Garron_the_Returned&oldid=1865176"
Categories:
Hidden categories: