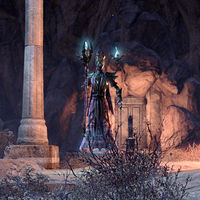 Ondagore the Mad is a Lich who can be found within the Halls of Banishment of the Unhallowed Grave. He was once a necromancer aspiring to lichdom who found his way into the Unhallowed Grave, only to become trapped during the First Era. Though he succeeded in his initial goal, the isolation damaged his psyche.

He acts as the fourth boss of the dungeon.

The fight takes place on a circular platform with pillars, surrounded by a deep crevasse. The walls have evenly spaced platforms with grapple points. The fight itself has two distinct phases which he will alternate between until he is dead:

Maladiction Poison Phase
In the first phase a green dome sphere will surround him and he will summon Skeletal Arcanists on the surrounding platforms. At this point the players will need to escape to one these with a grappling bow. They then need to destroy the spectral Arcanists on each platform before Ondagore will stop releasing poison.

Drain Soul Phase
In the second phase, white wispy smoke will begin to surround him. The attack can be avoided by hiding behind a pillar. He will also summon ghostly Menders which will begin to heal him, they can be interrupted but be aware of your surroundings as you may be caught in the open and hit with Drain Soul.

Drain Soul
Once a player is caught, they will be unable to move until the damage kills them.

Ghost Summon
During the fight between phases, he can summon ghost adds.

When you first enter the Halls of Banishment and he is alerted to your presence:

"You dare disturb me!"

While idling in front of him, he may say the following:

"Sanity is an illusion! Be free of it!"
"Let me show you true madness!"
"Gaze into the abyss!"
"Don't flee! Let the madness in!"

"We're all lost here. Lost in the dark!"
"Even in death, there is no escape!"
"You think you know fear? Let me educate you!"

This NPC is related to several achievements:

This Elder Scrolls Online-related article is a stub. You can help by expanding it.
Retrieved from "https://en.uesp.net/w/index.php?title=Online:Ondagore_the_Mad&oldid=2398490"
Categories:
Hidden categories: