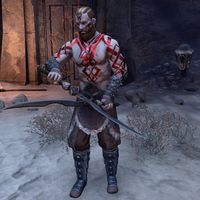 Hakgrym the Howler is a Nord and a lieutenant of the Draugrkin. He acts as the first boss of Unhallowed Grave and is accompanied by two Skeletal Werewolves and flesh abominations at the beginning of battle. During the fight he will reveal himself to be a werewolf behemoth once the odds go against him. 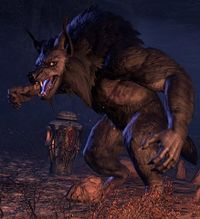 Hakgrym as a werewolf behemoth

As he reaches low health, the second phase begins where he turns into a Werewolf Behemoth and gains about half of his health back.

"I'm right here, runts. Any time you're ready."
"You going to make me wait?"
"The longer you make me wait, the sharper my swords get."
"You're right on time, runts. The lads here are starving!"
"I'll try to make this quick. Heh. No promises."
"I won't lie to you. This is going to hurt."

"Time for the harvest!"
"This is going to hurt!"
"You think you know pain? Ha!"
"Like grain before the scythe."

"I knew these things would come in handy."
"Let's get these chains off you, eh? Time to play."
"You hungry, boy? Eh? 'Course you are. Go get them!"
"You're pretty good! I guess it's time to call in the muscle."

Turning into a werewolf:

"Enough appetizers. Time for the main course!"
"You've got me bleeding all right. Let me return the favor!"
"You want a real fight, eh? Here it comes!"

"Too easy."
"Orkey's blood, I thought you'd give me a challenge! Too bad."
"Don't worry, I'll make good use of your corpses."
"What lies beyond the door? Ha! Guess you'll never know."
"Least you died in a graveyard, eh? Convenient."

This NPC is related to several achievements: