The UESPWiki – Your source for The Elder Scrolls since 1995
< Elder Scrolls Online: Places: Unzoned / Cyrodiil / Ruins
Jump to: navigation, search

A site hallowed by its association with Saint Alessia, Sancre Tor was the religious center of the Alessian Order for much of the First Era. By longstanding tradition, Emperors of Cyrodiil are buried in the funerary vaults beneath the city. 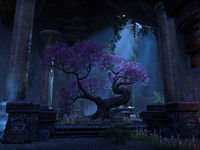 Sancre Tor is the ruin of an ancient Imperial city in the Colovian mountains of Cyrodiil. Sancre Tor was a holy city during the First Era, founded by Alessia, which became the center of the Alessian Order. Many emperors of Cyrodiil are buried in its vaults. 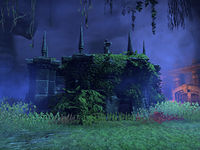 This is the first major area within Sancre Tor. Mannimarco will interrupt your delve when you reach the largest chamber. There are no enemies here.

The Crypt of Heroes lies to the north. The Inner Courtyard can be reached by continuing east along the path instead of diverting towards the crypt. There are no enemies here, but you will find hostiles in the crypt. 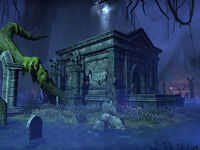 The Crypt of Heroes is an optional section of the dungeon, and houses a mausoleum in the center. Inside, you will find an unlocked treasure chest, but looting it will cause Mannimarco to summon the Lord of Iron and Woe. There is an unopenable chest behind a sarcophagus on the south side of the river, all the way to the east. Several wraiths, Skeletal Soldiers, and a Skeletal Pyromancer reside within this courtyard. 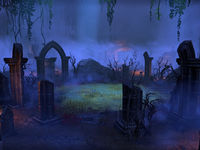 You'll encounter Mannimarco once again in the first room. Mannimarco summons four Worm Cult Necromancers and a rather large Bone Colossus after his speech is finished. A portal to the Harborage lies in the northeast corner. The Inner Courtyard lies east of here.

Sai Sahan will need to take a breather here. The Dragonguard Tomb lies to the east, the Reman Vault to the west, and the Vault of Kings to the north. 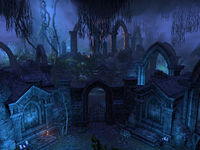 Mannimarco will raise the honored dead in this tomb as you pass through it to reach the shrine. The shrine must be consecrated, and is on the far west side of the room. Dragonguard soldiers, archers, assassins and fire mages will oppose you as you cross. 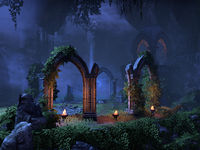 There is a puzzle involving levers in this chamber. Mannimarco summons a large Bone Colossus after you consecrate the shrine, and two wraiths to guard the bridge on the shrine's side of the chasm. Two wraiths will be by the levers, and two more wraiths guard the exit. If you fall into the river, a slope on the west side of the northern hill will lead you back up. A sack and a barrel can be looted by the exit. 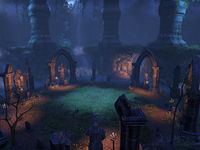 The Vault of Kings lies to the north. Images of Clivia Tharn (absent if White-Gold Tower is completed), Eyes-of-Steel, Jorunn the Skald King, General Noramil, Queen Ayrenn, The Silvenar (Appears as Indaenir even if Edhelorn has not died yet), The Mane (Akkhuz-ri by default),[verification needed — Is he replaced by Khali or Shazah, and if so after what quest?] King Emeric, King Fahara'jad, and King Kurog (replaced by King Bazrag after Long Live the King) appear while Mannimarco monologues. The specters kneel. 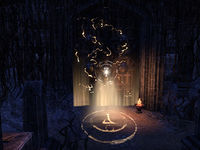 Door to the Vault of Kings

The Vault of Kings is an open-air garden with no ceiling. It is walled in. A cemetery surrounds the central courtyard, and the Amulet of Kings lies to the far west. Mannimarco appears in the center of the room; he must be defeated. 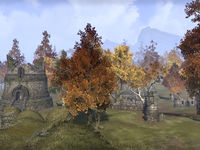 The exterior of Sancre Tor can be found in Cyrodiil, west of Fort Glademist in the Amber Woodland. It is overrun with skeletons and wraiths.

The tower closest to the center contains A Death Desired. Beneath the stairs lies The Remanada, Chapter One and a Book Stack containing a random book. On top of the tower is a chair with a goblet and a bottle next to it. The chair is in front of a broken portion of the tower, by the ledge. A heavy sack lies across this broken section, and you must jump over the gap to reach it.

In front of the central tower, a heavy sack can be found beside an intact statue of a hooded warrior holding a sword. 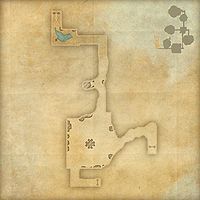 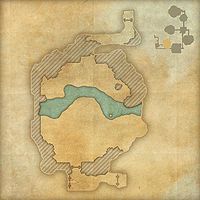 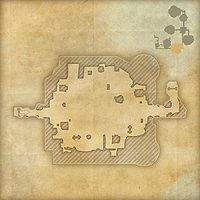 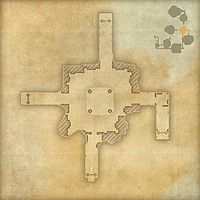 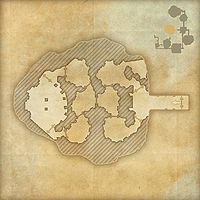 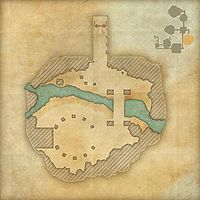 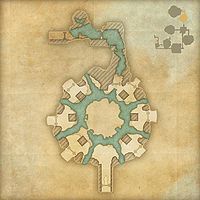 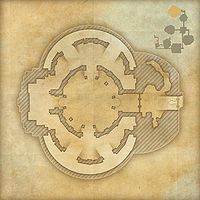