"(And Pelinal) broke the doors open for the prisoners of the Vahtache with the Slave-Queen flying on Morihaus above them, and Men called her Al-Esh for the first time." — The Song of Pelinal, Volume 4 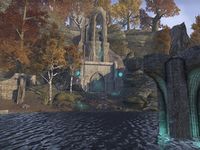 Vahtacen is an Ayleid ruin in eastern Cyrodiil, between Drakelowe and Farragut Keeps, containing undead. The ruins swarm with skeletons and wraiths. A powerful lich called The Faceless is located here. A note is located outside the ruin, next to the entrance.

This Elder Scrolls Online-related article is a stub. You can help by expanding it.
Retrieved from "https://en.uesp.net/w/index.php?title=Online:Vahtacen&oldid=2291957"
Categories:
Hidden categories: