The UESPWiki – Your source for The Elder Scrolls since 1995
< Online: Places: Shadowfen / Elven Ruins / Quest Hubs
Jump to: navigation, search

The Barsaebic Ayleids who built Loriasel intended it as a site for the veneration of the Ten Ancestors. The Lizard-Folk who have inherited the ruined amphitheater have put it to uses the Wild Elves never envisioned. 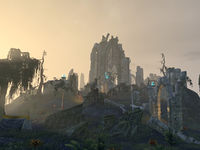 Loriasel is an Ayleid ruin in southwestern Shadowfen. It is currently inhabited by Dominion soldiers, various lamia, and ancient Ayleid warriors. 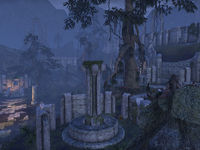 Barring the entrance and the large central room, the upper part of Loriasel is divided into three separate parts. In the north, a door leads to the Loriasel Inner Bailey which is a large open area. To the east there is a section of caves, where you will face hostile lamias. To the west there is an area inhabited by Ancient Bonelords, Ancient Warriors and Ancient Vanguards as well as wraiths.

There's a slaver camp west of Loriasel, northeast of the Shadow Mundus Stone. 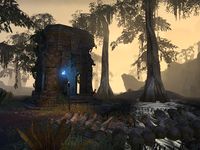 Loriasel Wayshrine is located south of the ruin.

This Online-related article is a stub. You can help by expanding it.
Retrieved from "https://en.uesp.net/w/index.php?title=Online:Loriasel&oldid=2209015"
Categories:
Hidden categories: