The High Elves live long lives and have a talent for magic. Sometimes an Altmer's pursuit of magical power leads to tampering with forbidden knowledge and illicit dealings with evil Daedra. It was to confine such trespassers that the Banished Cells were created. 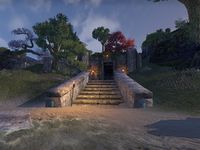 The Banished Cells I

The Banished Cells I is a group dungeon found at the northern tip of Auridon.

In this version, Keeper Cirion needs your help binding the spirit of a dangerous Altmer, High Kinlord Rilis.

Hard Mode is only available in the Veteran version of The Banished Cells I. When you get to the final boss fight against High Kinlord Rilis, you have the option to activate the Scroll of Glorious Battle, located on a corner of the central platform. Activating the scroll will display the following:

<This scroll bears the insignia of the Undaunted and a potent spell, conceived of by the renowned Hroltar the Boaster. When invoked the scroll will empower one's enemies with astonishing power.
The full incantation isn't short on colorful language.>

Give me a foe worth bragging about!

Activating the scroll will cause a blinding flash of light and will make the boss fight more difficult. If your group dies, the scroll will need to be activated again to reenable Hard Mode.

There are several achievements associated with this dungeon: