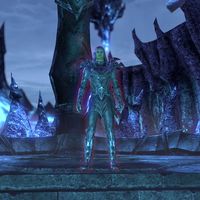 High Kinlord Rilis in the flesh

High Kinlord Rilis is the spirit of an ancient Altmer found in the Banished Cells I, of which he is the final boss. He has a chance to drop two unique items, Guilehammer, and High Kinlord's Revenge

As a boss type enemy, High Kinlord Rilis is immune to all forms of crowd control effects.

Slash
A basic melee attack that does moderate Physical damage. If taunted, the boss will be forced to use this attack on the tank only.

Crushing Blow
A heavy melee attack that does high Physical damage as well as knocking down the target. This attack can be blocked to reduce the damage taken, as well as preventing the knock back. If taunted, the boss will be forced to use this attack on the tank only.

Soul Blast
The boss will fire an orb at a random player, doing high Magical damage and knocking the player back. This attack can be blocked or dodged to prevent the knock back.

Daedric Tempest
The boss will raise his sword in the air, and pools of blue fire will appear under each player's feet. The fire does high Flame damage over time, and should be avoided by stepping out of the red circle.

The Feast
Feast orbs will appear from the altar where he first spawns and move towards him. If they touch him, he will be substantially healed. When an orb appears, the party should focus on it to destroy it quickly. To prevent them from reaching Rilis before they are destroyed, either Rilis should be kited to the opposite wall or a DPS should immediately destroy them. They are not immune to knockback or crowd control effects, which should be used on them if they are not destroyed before reaching Rilis.