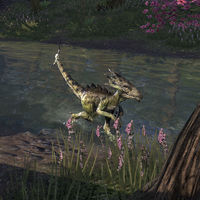 Clannfear are aggressive, quick, and dangerous bestial Daedra. They have a small frill, plated spikes on their spines, and a deadly tri-tipped tail. They are flock inclined—they will work together to bring down enemies—but they are still deadly individually. They have bird-like movements, but retain an almost brutish quality to their attacks.

They have a chance to drop the Clannfear Leather Strapping antiquity lead for the Spaulder of Ruin. 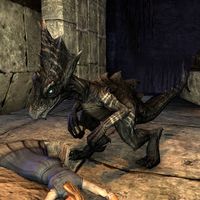 A black clannfear from The Banished Cells II

Generic, unnamed Clannfear can be encountered in various places across Tamriel, including delves, dungeons, and DLC content. These Clannfear have varying stats, namely health. Below is a list of Clannfear, categorized by location, difficulty and health.