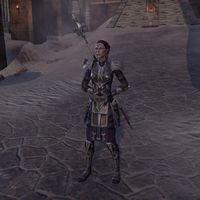 Septima Tharn is the Imperial Magus-General of the Imperial Seventh Legion. She is a relation to Empress Regent Clivia Tharn, though sources differ on whether she is a sister or a cousin. Septima is involved in several quests in Bangkorai; and if you have completed To Walk on Far Shores, she can later be found imprisoned in Heart's Grief, from where she can be freed if desired.

Once arriving Nchu Duabthar Threshold, you can listen in on Septima and Queen Arzhela's attempt at parley.

Darien Gautier: "Clear! Take up positions!"
<Fighters Guild members take positions and Queen Arzhela enters.>
Queen Arzhela: "I don't like this. Where's the Magus-General? It's not like a Tharn to be late."
<Septima Tharn appears out of thin air.>
Septima Tharn: "Impatience is hardly the mark of a strong ruler, Your Majesty."
Queen Arzhela: "When you're queen, you're welcome to set a finer example, Magus-General."
Septima Tharn: "That's one honor I do not seek. What I do seek, is the unconditional surrender of Evermore."
Queen Arzhela: "You came all this way just to make absurd demands? I'm surprised."
Septima Tharn: "Hardly absurd, Arzhela. I tried the soft approach with the duke, but you spoiled the effort. I've come to make one final offer: surrender, or you will die."
Queen Arzhela: "Your threats carry little weight, Septima. Bangkorai Garrison still stands between us, and it does not fall easily, or did you miss that in your history lessons?"
Septima Tharn: "Those who hide in the shadows of the past are crushed when its structures come tumbling down...Bangkorai Garrison has already fallen. My legionaries walk its battlements even now."
Queen Arzhela: "Is this another of your lies? I don't care. It's clear you want a war. And if that's what you want, you can have it!"
<Queen Arzhela attacks Septima Tharn, Septima flickers, revealing herself to be a projection.>
"What the...? She's not even here! It's an illusion!"
Septima Tharn: "Ha! Just remember, you struck first, Arzhela. Seventh Legion—Attack!"
<Septima Tharn disappears.>
Darien Gautier: "Ambush! Defend the queen at all cost."

While moving through the Royal Crypt, Septima Tharn can be overheard speaking with Battlemage Papus, but she will teleport out before you reach her.

Battlemage Papus: "The king's champion is coming, Magus-General. Should we make an example of this fool?"
Septima Tharn: "It's not "we", Papus. It's "you". I have other matters to attend to. Finish the ceremony first, then deal with the interloper."
Battlemage Papus: "Yes, of course. The dark anchors first, then the...interloper. Thank you for this honor, Magus-General. Glory to the Empire!"
Septima Tharn: "Glory to the Lord of Brutality, Papus. Glory to Molag Bal."

As King Emeric lays out his plan to storm the Hall of Heroes, Septima will arrive and after some taunting and displays of magical might she will take the King.

High King Emeric: "All right everyone. This is it. No one is allowed to die until they're taken down at least a dozen enemies. Kill as may as you can. The only exception is the Magus-General—she's mine, and mine alone."
Septima Tharn: "Good speech, Emeric. I can't believe you still fancy me after all these years. Let's get reacquainted then, shall we?"
High King Emeric: "Overconfident as ever, I see! I'm not afraid of you, Septima …."
Lion Guard: "To arms! Defend the King!"
<A pool of pale blue magic coalesces around her.>
Septima Tharn: "You will not!"
<The Lion Guard squad falls down dead. Dark magic surrounds King Emeric as Septima walks up to him.>
Septima Tharn: "I think we need to spend some alone time, Emeric. Come, let's find a quiet place …."
<Purple shackles bind the King's wrists and both disappear in a ball of light.>

To Walk on Far Shores[edit]

Eventually you will catch up with her in the Chamber of Passage where she holds King Emeric. As you approach things will take a turn for the worse.

Septima Tharn: "Ah! Look Emeric, your savior has arrived! Or is that your executioner?"
<She stabs King Emeric and disappears.>

After following the King's soul into the Far Shores, Septima will appear and reveal that her true target was you—the vestige. Then the Keeper of the Hall will interfere.

High King Emeric: "You're here too? Can you get us back? It's quite pleasant here, but I'm not ready to die yet! We can't let them win?"
<Septima Tharn will appear.>
Septima Tharn: "Hush now, Emeric. Your death matters little—there are other kings. It's this one I wanted. The one who's been holding the Covenant together at every turn. The vestige from Coldharbour."
<...>
Septima Tharn: "Didn't think I knew, did you? I did, and I knew I couldn't kill you … on Mundus. Here though, you're severed from Coldharbour, from your soul. Here, you're stuck. Goodbye now."
Keeper of the Hall: "Insolent necromancer! The Far Shores is no prison in which you can place your enemies! You dare to come here and then expect to leave freely? I think not."
<The Keeper then speaks to you.>
Keeper of the Hall: "You though, are no less a fool. An honorable fool, but a fool nonetheless. Hm. Very well, though. I have an offer: slay this wretched woman and you and your liege can return to the Mundus."
Septima Tharn: "I'll leave whenever I damn please … but I'll enjoy teaching you both a lesson in power first."

At these words, Septima will leap down into the stone square, ready to fight you.

Septima fights like a Battlemage, with a necromatic bent.

Flare[verification needed — see talk page]
Basic magical attack, fire based.
Ice Cage
Septima creates ring of frost around herself that does moderate frost damage over time to all players in the red circle.
Impending Storm
The enemy charges up and releases lightning from itself as indicated by red circles. This attack does moderate shock damage to all enemies hit. This attack can be interrupted to set the enemy off balance or simply avoided.

At two points in the fight, she will teleport away and summons squads of Hel Shira Spirits. Which will attack in two waves. Heralding the first wave, she will yell:

Septima Tharn: "Here or there, the dead are mine to command! Hel Shira! Rise and fight!"

Once they are dead, she leap back down and continue to fight you.

The second time she will shout:

Septima Tharn: "If it were my aspiration, I could rule this plane!" 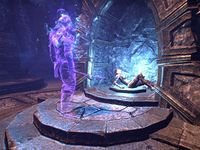 Septima is killed by an Ancestor Spirit.

Septima can be found being tortured in the Heart's Grief Vestibule. If you talk to her, she will beg for you to release her.

"Please, get me out of here! I've changed! Please!"
How have you changed?
"It's … it's clear I chose the wrong side. I should have seen the greatness in you. Let me out, and the Seventh Legion will be yours to command!"

After you talk to her, Abnur Tharn will comment: "Septima Tharn. A grand niece on my mother's side. Or was it a third cousin? No matter. From what I've heard of her predilections, she belongs in this gallery of horrors."

If you choose to release her, a spectral Redguard Ancestor Spirit will appear and she will say:

Septima Tharn: "An ancestor spirit? Here? What are you―"

The spirit then walks up to her and stabs her with his sword.