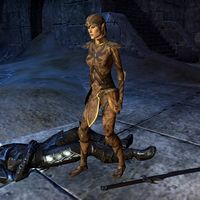 Keeper Imiril, during the end of Banished Cells I 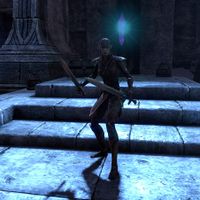 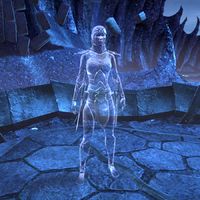 As a boss type enemy, Keeper Imiril is immune to all crowd control effects.

Slash
A basic attack that does moderate physical damage. If taunted the boss will be forced to use this attack on the tank only.
Corruption
The boss summons orbs of magic that bounce around the room, dealing moderate magical damage over time as indicated by a red circle.
Summon Dark Daedra
The boss disappears and summons five Banekin to attack the party. The next time the boss does this she will summon four Winged Twilights, and the next time she will summon three Clannfear. These should be killed quickly to simplify the fight.
Daedric Blast
After summoning the creatures, the boss will reappear and cast an explosion around herself that does high magical damage around herself as indicated by a red circle.

After High Kinlord Rilis' body has been destroyed, his spirit will project itself from his crystal to taunt the keepers.

Rilis: "You think you've beaten me? How amusing. Haven't you noticed that the pact I've made protects me from death?"
Cirion: "Ignore his words, Keepers. Begin the preparations."
Voranil: "I'm not confident this will work, Cirion!"
Rilis: "Ha ha ha! What are you lot doing? Oh, I do so love to see magic. Is that what this is? This isn't as grand as the spells I learn from the Daedra, but I don't expect much from mortal Altmer. Remember, children—you'll never keep me here of your own accord. Not when the Daedra fight for me. Perhaps you'd fare better if you had Daedra on your side! Ha ha ha!"
Cirion: "His madness nears delirium. Ignore him, Keepers. Bind the High Kinlord!"
<The Keepers started the ritual, channeling Rilis' powers away from him. The High Kinlord is engulfed in a beam of golden light, he flails about but still mocks them.
Rilis: "Oh, my. It looks like you've won. Old Rilis' days of freedom are over, it seems."
<Rilis' spirit disappears.>
Imiril: "I thought you said this bastard wouldn't be able to speak."
Cirion: "He shouldn't be able to achieve coherent thought. We'll have to watch him carefully."

You can speak with her after she and the other Keepers have finished binding Rilis, in which case she says:

"By Aetherius, we barely managed to contain that lunatic!
Voranil might be right. If these binding stones don't hold, we may need to take drastic action to defeat Rilis. Even if it means making a Daedric pact."

Even though she does not leave after the completion of the quest, it is no longer possible to speak with her at that point.

Keeper Imiril: "Your blood will temper my thirst, your bones will end my famine!"

Keeper Imiril: "We'll use your blood to paint the walls!"

This Online-related article is a stub. You can help by expanding it.
Retrieved from "https://en.uesp.net/w/index.php?title=Online:Keeper_Imiril&oldid=2198994"
Categories:
Hidden categories: