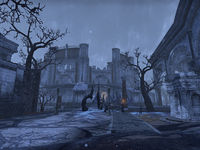 The Arena District is the eastern district of the Imperial City. The White-Gold Tower lies beyond the district's western wall. The Arboretum lies to the south, and the Memorial District is through the northwestern wall. Immolator Charr and Glorgoloch the Destroyer are this district's Patrolling Horrors. They wander the round street that wraps around the Arena, which lies in the center of the district.

The district contains a four-wave PvE arena, which is overseen by Dredaza the Ringmaster and her second-in-command, an announcer named Historoth the Lesser. Daedra line the stands, eager to see bloodshed. The Arena's entry gate, which locked during each wave, was removed in Update 10. This allows for unhindered PvP inside the arena, which was previously subject to players blocking the gate with Caltrops, preventing entry by enemy players. After the final wave, participants are rewarded with a chest. You can enter the Arena through the northeastern entrance, which lies across the street from the Ethereal Trophy Vault. A chest can spawn just to the right at the top of the stairs. Alternatively, you can traverse the Daedra-filled underhalls after entering through one of several holes in the wall. One such broken wall is located at the southern exterior wall, facing the giant door leading to the Arboretum. The district's Sewer Grate lies north of the trophy vault, right next to it.

Xivkyn are standing at the Arena's entrances, each accounting for two Imperial Citizens who are bound and lined up to be pitted against Molag Bal's horrors in the Arena. Daedra and loot lie within the defiled halls of the arena. A chest can be found under the stairs in the eastern wing.

The District's flag lies along the southwestern canal. A Xivkyn and a Dremora terrorize an Imperial Citizen in front of the flag, along the southern end of the road. The Daggerfall Covenant Base lies southeast of the flag. An Imperial Citizen is being made to chip away at a pile of debris along the Arena's exterior wall north of the Covenant base. The entrance to The Rusted Nail, a wrecked tavern, lies along the district wall south of the Daggerfall Covenant Base. The southwestern door, which leads to the Arboretum, is near the base. A heavy sack can spawn west of this door, in front of a broken crate near a backpack. A ditch where two Imperial Citizens are being forced to fight is located west of the base. A Dremora Caitiff and Kynval cheer while the mortals beat each other to death. An Ogrim's patrol takes it between the ditch and the door.

The street located east of the Covenant base (which runs south away from the Arena) leads to the Arboretum District. A Xivkyn Dreadweaver oversees a captive Imperial Citizen in the middle of this road while two Dremora look on. There is a hole in the wall in the southern exterior wall of the arena. A chest will occasionally spawn in the wreckage here. You can also enter the gladiators' quarters from this hole in the wall.

The district's portal is located near the southeastern door leading out to the Arboretum, east of the district's southern street. A copy of The Year 2920, Vol. 14 is in the grass east of the southeastern door. The book is in the very southeastern corner of the district, between the outer wall and a cage with a burned corpse in it. An overhang, which has chains hanging from the ceiling, is draped above the street in front of the portal. Cages are set up beneath the structure; an Imperial Citizen is being tormented by a Dremora Caitiff here. The Ebonheart Pact Base is located east of the portal, north of the Arboretum door. An Imperial Citizen is being held captive by two Dremora Kyngalds west of the base. A chest can spawn beneath the base and beside a boulder just north of the base. Two Imperial Citizens are being forced to dig between two rows of cages east of the base. Two Ogrim patrol the ground outside the base as well; one of them wanders over to the nearby skyshard ditch to briefly watch the bloodsport, and the other walks back and forth near the Arboretum door. Northwest of the portal, a Dremora Morikyn and Dremora Kynval watch an Imperial Citizen carry boxes from a pair of backpacks beside a nearby pillar to the Arena's exterior wall.

A chest can spawn against the eastern exterior wall of the Arena, near a cart full of corpses where a Dremora Kynval threatens an Imperial Citizen while a Dremora Morikyn watches. There is a ditch across from this wall where two Imperial Citizens are being made to fight to the death for the amusement of four Dremora; two Dremora are on each side of the ditch, blocking both paths into the bottom of the ditch. The district's skyshard is located along the eastern wall above the ditch, and is accessible by approaching from the northern end of the ditch. A heavy sack can be found against the exterior southeastern wall of the arena. Another heavy sack can be found sitting against the exterior northern wall of the arena.

Two Imperial captives are being detained by Dremora across the street from the district's sewer grate. Another pit-fighting ditch is located north of the Arena. Two citizens are fighting in it, overseen on both sides by two groups of two Dremora onlookers. There is a second overhang at the northern end of the district. Cages line the street beneath the structure. Two Dremora are watching over a captive Imperial at the eastern end of the overhang, where the mortal is being frightened into submission with the threat of having a caged Clannfear unleashed upon them. Another captive is being forced to dig northeast of this group. An Imperial Citizen is being held in a cage at the western end of the structure, being coerced into remaining by an Ogrim and a Dremora. A Xivkyn Voidstalker often walks up to them from the district's second portal, which lies north of the overhang. The door in the northern corner of the district leads into the Memorial District.

The Aldmeri Dominion Base is located southwest of the large door leading into the Memorial District. Two Imperial Citizens are being forced to clear debris on the northern side of the base. Two Dremora and a passing Xivkyn Cauterizer observe their progress. A Xivkyn Voidstalker and an Ogrim patrol the streets near the base. A chest can spawn on the western side beneath the base, along the side of the road which runs adjacent to the Memorial District wall. There is a pit south of the Dominion base, between the base and the canal which runs beneath the flag. As with the other ditches, to citizens are being made to fight each other for the Daedra's amusement. These captives are overseen by two jovial Dremora. A side door to the Memorial District is located west of this pit. A chest can spawn along the stone wall on the south side of the pit.

Each Alliance has a rally point in the district situated within a small tower, which can be accessed from their Alliance Base in the Imperial Sewers. The rally points are protected areas which members of enemy alliances cannot access, but enemy players can still attack players at the rally point from below with ranged weapons and spells. There is a Sanctuary area in the interior section of the rally point tower which nullifies all damage while a player is standing in it. 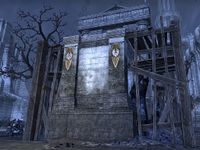 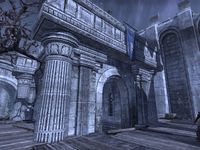 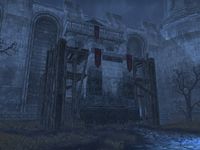 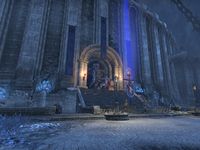 The Arena District capture point is located on the bridge to the inaccessible Imperial Palace, in the southwest of the district. 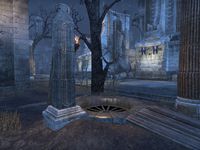 The Arena Sewer Entrance is located on the eastern side of the district, along the outer wall. It provides access to the Harena Hypogeum section of the Imperial Sewers. 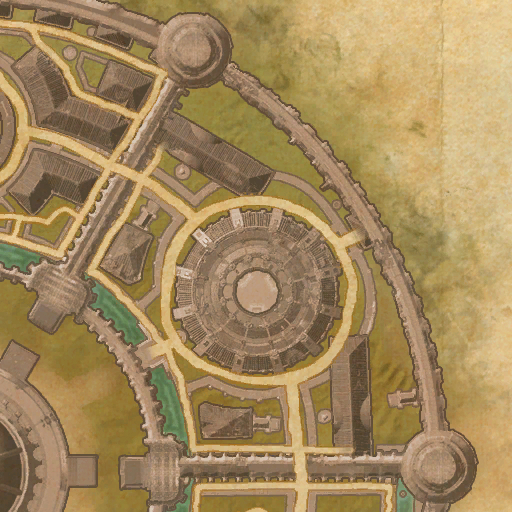 A map of the Arena District