The leader of the Citadel commands his Reavers from within this Dremora stronghold. The unique shape and oppressive design of the place can be disturbing to mortals, but it suits Valkynaz Seris just fine. 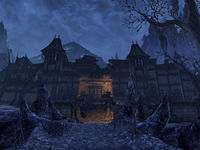 The Reaver Citadel is a fortress in northern Coldharbour which was once a city in Tamriel. The Reaver Citadel is the last bastion standing between the invasion force and The Endless Stair, which lies to the north. The pyramid is currently controlled by the Deathbringer Clan.

The city can be accessed via a broken wall to the east, near the Survivor's Camp. Bha's Bargains lies close to the entrance hole. The lower level of the city contains an Abandoned Building and many patrolling Dremora. The abandoned Fighters Guild Hall is up the first set of stairs. You must enter that building to allow the invasion force to subtly enter the citadel. Up the next set of stairs is the door leading to the upper level.

The upper level of the city contains a destitute cathedral, the Mages Guild Hall and the Reaver Citadel Pyramid. Areyne Faryon runs a general goods store near the cathedral.

Valkynaz Seris resides here. You will need to fight Titan Djanax to reach him. 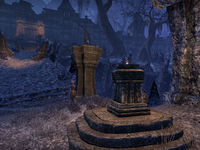 Reaver Citadel Wayshrine is located to the south of the fortress, on the bridge leading out of the Orchard. 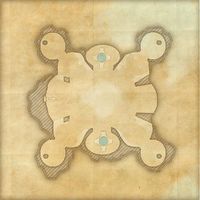 A map of the Citadel Pyramid

This Elder Scrolls Online-related article is a stub. You can help by expanding it.
Retrieved from "https://en.uesp.net/w/index.php?title=Online:The_Reaver_Citadel&oldid=2289883"
Categories:
Hidden categories: