The Deadlands: The Ashen Forest is an isolated region within Mehrunes Dagon's realm in Oblivion. It is said to be home of the Dremora Xynaa and her clan. Like the name suggests, the area is filled with burnt trees and daedric structures dot the landscape. The largest of these is Xynaa's Sanctuary, which is found in the northern part of the map, with the winding path leading to it from the entrance portal. During the related quest, the portal to this area is created at the Plateau of the Traveler by Sombren, Calia and Destron using Deadlands Slivers you have collected.

The reason you are traveling here is to get Xynaa to train the twins in controlling their fluctuating powers, like she once did for Sombren. You will have to guide Calia and Destron to the sanctuary while visiting three Obelisks which sit along the path.

As mentioned above, the layout of this area is a long winding path which leads to the entrance of Xynaa's Sanctuary. Xynaa refers to it as the "Path of the Obelisks", which consists of three daedric structures: the Obelisks of Origin, Empowerment and Inevitability. When these are activated, they will show visions of the past and future. What they show depends on the individual. 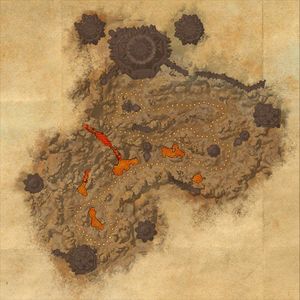 This Elder Scrolls Online-related article is a stub. You can help by expanding it.
Retrieved from "https://en.uesp.net/w/index.php?title=Online:Deadlands:_The_Ashen_Forest&oldid=2492766"
Categories:
Hidden categories: