The UESPWiki – Your source for The Elder Scrolls since 1995
< Lore: Factions: N
Jump to: navigation, search 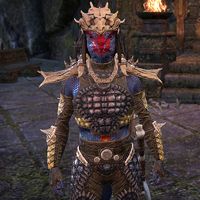 The Naga-Kur (known as the Dead-Water Tribe in Tamrielic) is a tribe of Nagas, a rare breed of Argonian. However, they seem smaller than the pre-determined average size of others of their kind. Their village is known as Dead-Water Village and they control vast swaths of northern Murkmire and are greatly feared by the Argonians of the surrounding villages.[1] The Naga-Kur often adorn their weapons and armor with pieces of fallen comrades. To craft a weapon from the skin and bones of their warriors is considered an honor.[2]

This Lore-related article is a stub. You can help by expanding it.
Retrieved from "https://en.uesp.net/w/index.php?title=Lore:Naga-Kur&oldid=2379307"
Categories:
Hidden categories: