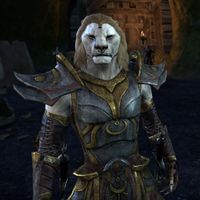 Akkhuz-ri is the current Mane of the Khajiit people circa 2E 582. 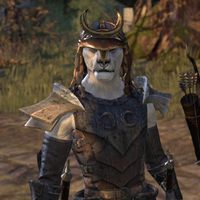 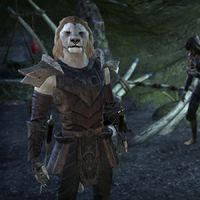 Bodring will send you to look for the Mane, and you'll find him in the Old Imperial Checkpoint in the Driladan Pass.

"The incessant clamor of the undead at the gate finally stops, and you come through the gate—it is a relief to finally see someone new from among the living.
Is Akkhuz-ri correct in thinking you have come to our aid?"
Yes. I'm here to help you get to safety.
"Good. Very good. The tunnel is cleared then, yes? Akkhuz-ri is eternally grateful. He can make it back to Marbruk and send reinforcements to hold the tunnel.
The far greater concern is discovering what has prompted the undead to attack."
I was told Prince Naemon is leading the undead.
"Yes. This one saw the prince with his own eyes. He is no longer Naemon though—he has been raised and possessed by some darkness.
Even so, Akkhuz-ri does not understand. The prince ordered his forces to attack, and then he disappeared."
Where did he go?
"No one knows, but if destroying Marbruk were his goal, you would expect the prince to remain, yes?
No. The prince plans something else, and his plans must be uncovered. You are clearly capable. I think you should undertake this task."
All right. Where do I start?

All right. That makes sense.

Akkhuz-ri will lead you a few steps away to where Indaenir is nursing the wounded.

Indaenir : "Yes. Yes. That makes sense. Perhaps it's better if I go out into the pass and try to discover why Naemon ordered the undead to attack in the first place."
Mane Akkhuz-ri : "Yes. Both of you go. Find out what Naemon is planning and report to Marbruk. Don't try to do all this on your own … and of course, may bright moons light your path."

After assisting Indaenir, you'll find the mane back at the gates to Marbruk with Bodring:

"Akkhuz-ri was right. With Indaenir's talents and your skills, you make a powerful force for goodness.
Though Naemon remains at large, this one believes the tide has already turned."

After speaking to Bodring, he'll tell you:

"This one will remain behind to aid the injured. But you will see Akkhuz-ri again soon."

His highness will be outside Hectahame with the gathered party of who's who of the Dominion: "This one wishes there was more that could be done. Indaenir is certain you're the key."

Inside the ruin, events will leave the Shade of Naemon defeated and Indaenir collapsed on the ground. Akkhuz-ri and Cariel will come running in:

"Indaenir is dead? He is playing one of his Bosmer tricks. He must be. No … he really is dead.
Dark moons. Curse you Indaenir for being mortal, and curse us for being so slow to arrive after we saw the corruption recede."
Indaenir sacrificed himself to remove the corruption.
"Just like a Bosmer! It is not enough for him to save us all, he must mock us with the nobility of his sacrifice. We will feel this loss more deeply than most.
But it looks like the dead prince is dead once again."
Naemon is defeated and Valenwood is safe.
"Indeed. Queen Ayrenn should be informed. She entrusted you with this mission, so it would be best if you told …. Wait, did you feel that?"
Feel what?

Indaenir's body begins to glow and surrounded by a vortex of winds and leaves:

If you speak to Akkuz-ri he'll say:

"This one wishes there was more that could be done. Indaenir is certain you're the key."

When Cariel runs out to tell Razum-Dar, Akkuz-ri will add, "Yes, and Queen Ayrenn must be informed as well."

Outside you can ask him for more info:

"Quite an amazing scene to witness."
Indaenir is the Silvenar?
"Ah. How did this one miss it? Talking to torchbugs, healing the forest, seeing invisible Spriggans—I thought he was just another mad Bosmer!
It turns out, I was the mad one, and Indaenir was the Silvenar all along!"
What does this mean for Indaenir?
"Besides a timely resurrection? A wedding, of course. He will be joined to the Green Lady and together they will represent Valenwood as leaders of the Dominion, with Queen Ayrenn and myself."
I see.
"Hurry. We must inform the Queen."

Once you've spoken to Ayrenn, she'll be surprised at the news of Indaenir becoming the new Silvenar and look to Akkhuz-ri for confirmation:

Once Queen Ayrenn announces Indaenir at the new Silvenar, he'll add, "Remarkable how Valenwood rights itself. We have Silvenar and the Green Lady once more. When they are united, the Dominion will be stronger than ever."

The Mane vanishes in a puff of smoke.

During the quest, you must defeat a possessed Akkhuz-ri.

After defeating the Mane:

"Bright moons, you have saved Akkhuz-ri. Drove out the evil that was corrupting his soul. Thanks to you, Akkhuz-ri is free."
You're well now? You've done some terrible things.
"It was not this one that did those things. He... he remembers. The screams, the anger, the blood... Akkhuz-ri remembers. He was ridden, controlled by an ancient evil. We call it the Dark Mane."
The Dark Mane?
"This one thought it was a tale. A story told to cubs. But then, he thought the same about the Dro-m'Athra. The Dark Mane was the leader of our people in ancient times, but he fell. He was cast out of the Moon's light, to walk forever in darkness."
It left this place. Do you know where it went?
"This one remembers it talking to Javad Tharn... speaking of dark treachery. Visiting places throughout the March. But no, Akkhuz-ri does not know where it went. Please, we should leave this place."
Yes, let's go. Just know I'll be watching you.

If you speak to him again, he'll only say, "Akkhuz-ri is not surprised that an Eye of Queen Ayrenn will easily accept what happened."

When the quest begins, the Mane will step down from his position. He feels that he can never atone for what he did when he was possessed by the Dark Mane.

If you speak to him he'll tell you, "It seems Akkhuz-ri may have hope here. Kazirra mentioned forgiveness, and perhaps helping to rebuild Arenthia will aid this one in atonement."

Upon entering the temple he will greet you with:

"This one is humbled to stand before the Moon Hallowed. You have done so much for Akkhuz-ri's people... more than he has done in some time, he thinks."
How are you, Mane?
"You speak falsely. As this one said at Arenthia, Akkhuz-ri is the Mane no more. The touch of darkness, the stain of Javad Tharn's creature, remains. He can never atone for what he did."
It's good of you to be here to support the Champions, then.
"This one has known Shazah and Khali since they were cubs, since their days at the temple. They are strong, proud women. Our people will be in good hands, whoever walks the Two Moons Path."

Once you've spoken to Kauzanabi-jo, he will tell you, "Take care inside, Hallowed. This one remembers his cleansing. Many things from the past came to the fore, many old wounds re-opened. Stay close to the Champions, and keep them safe." After the trials he will say, "You've done well, Hallowed. I can see the echoes of moonlight hanging in the air. Jone and Jode … they are pleased."

"The Champions are in your hands, Hallowed. Keep them safe, and be careful. The path to the Mane is fraught with danger, heartbreak, and sacrifice."

Activate the first crystal and you'll witness a memory:

Queen Ayrenn : "Mane Akkhuz-ri, it is a pleasure to meet you. The Khajiit and their faith will be the Dominion's bulwark against the darkness."
Akkhuz-ri : "Thank you, my Queen. May the Bright Moons guide us in our new endeavor."
Khali will recognize the vision:
Khali : "I know this! The day the Elden Accord was signed! The Mane was a good leader, Hallowed. A warrior."

This Online-related article is a stub. You can help by expanding it.
Retrieved from "https://en.uesp.net/w/index.php?title=Online:Akkhuz-ri&oldid=2193718"
Categories:
Hidden categories: