The UESPWiki – Your source for The Elder Scrolls since 1995
< Elder Scrolls Online: Quests: Aldmeri Dominion / Auridon
Jump to: navigation, search
I've been taken to the secret island stronghold of the Veiled Heritance. If I can pass their trials, I may be able to discover the true leader behind the Veil. 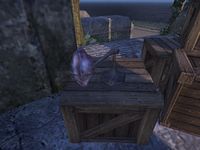 The black soul gem with which you have pledged your soul

After you have pledged your soul to the Veiled Queen and her cause, your recruiter Palomir will explain that you have more trials to complete before you are officially made an officer.

"You're a lucky recruit. The Veiled Queen herself will be making a speech in support of the cause. You'll be able to see her firsthand!
Assuming you survive the trials."
If I survive?
"Before you lies three trials—endurance, intelligence, and strength. A Heritance officer must embody all three of these virtues or they're no officer.
I recruited you. Don't fail me."
I won't. Which test comes first?
"Intelligence. Ohmonir proctors the test, just up the path from here. Go."
I'll find Ohmonir up the path.

You must pass three trials to become a Veiled Heritance officer. If you succeed you will be able to see the Veiled Queen. Your borrowed Earring of Altmer Nobility is still successfully hiding your identity. 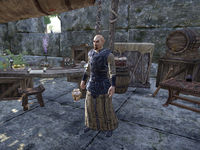 Ohmonir and the Trial of Intelligence

Ohmonir, to the east, is in charge of the first test. He will ask you two riddles to test your intelligence.

"You've come to test your mind? Learn if you have what it takes?"
Yes, I'm ready.
"The test is simple. I will give you a riddle. You choose from the items on these tables. One of them is the correct answer. Choose wrong? Face the consequences."
Ask your riddle.

After hearing the riddle, you will need to select an item from the tables that you feel is the correct answer and then talk to him afterwards.

If you choose the correct item, he will set you another riddle.

"You have chosen wisely. Are you ready for another question?"
Yes. Go on.
"Answer this correctly and our business is done."
Ask your riddle.

He asks another random riddle.

Once you pick the correct item he will congratulate you and send you to the next trial.

"Well done! You've proven you have a well-honed mind."
What's next, then?
"Now you must prove your heart's endurance. Speak to Varustante and she will begin your trial." 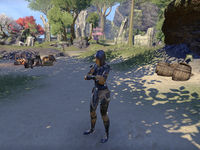 Varustante—Proctor of the Trial of Endurance

Varustante, to the north of Ohmonir, will test your heart and body's endurance.

"Here for the Trial of Endurance? This is a race around the island, mind. Not a casual stroll. Think you can handle it?"
I can handle this.
"On my mark, magical pillars will appear on a set path. Follow the markers and keep to your feet
Oh, and 'ware the imps. Little bastards have sharp teeth. Ready?"
I'm ready. [Start Race] 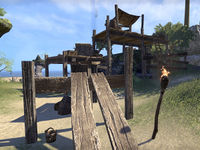 Race around the island obstacle course

You need to run around the island within the two minute time limit. Blue flames and beams of light will represent the markers which you need to run close to for it to count. Skills or items that improve your speed such as Rapid Maneuver or speed potions are recommended. Also try to avoid the imps as they can also slow you down. If you fail to make in back in time, just talk to Varustante to retry the trial.

When you have made it back within the time limit, talk to Varustante to complete the Trial of Endurance.

"An impressive time. You've passed the Veil's trial of endurance."
What's next?
"Alandare proctors your final trial—the trial of strength. Get going." 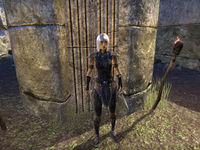 Alandare—Proctor of the Trial of Strength

Alandare and the last trial are east of Varustante just outside the ruins. She will be dismissive of you when she sees you.

"You guessed the old man's riddles and ran a little race. Good for you. Ready for a real challenge?"
How do I prove my strength?
"You fight. Every officer under the Veil needs to know how to fight. Behind me is the combat ring. You'll go up against other officer candidates."
I'll be fighting other recruits?
"I don't want to hear moaning. We've a long road to walk before we remove that heretic Ayrenn.
The Veiled Queen deserves only the best. So we only take the best."
I'm ready.
"We'll see. Head up the stairs, join the melee. If you survive, you're in.
Prepare yourself." 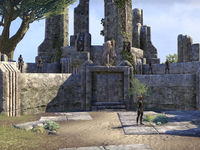 The Trial of Strength

Head up the stairs to the makeshift fighting ring where the other potential officer recruits are waiting. Most will be waiting atop the ruin walls and will jump down when you initiate combat, your opponents include, a Initiate Soldier, Cuttthroat, Ice Master and Heritance Deadeye. Once they have all been defeated, you can return to Alandare.

"Good work. You're tougher than you look."
Thanks. I think.
"I get to welcome you beneath the Veil. Do your damnedest to make the Veiled Queen proud."

Complete the trial, and Alandare welcomes you as an officer of the Veiled Heritance. Talk with her some more and she will set you your first task, introducing yourself to the Veiled Council.

This Elder Scrolls Online-related article is a stub. You can help by expanding it.
Retrieved from "https://en.uesp.net/w/index.php?title=Online:Wearing_the_Veil&oldid=2395777"
Categories:
Hidden categories: