The UESPWiki – Your source for The Elder Scrolls since 1995
< Elder Scrolls Online: Quests: Coldharbour / Story Quests
Jump to: navigation, search

This tower is a lightless oubliette, a prison of darkness that binds King Laloriaran Dynar, the last Ayleid King. 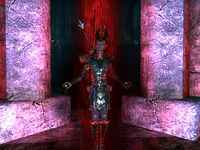 When you first arrive, a projection of King Laloriaran Dynar will appear and ask you to retrieve the Light of Meridia in the front room. It is underneath the large tree to the left. You can move one of the roots to get in, or go around the back, where there's a small gap you can fit through.

The Mindshadow Crystal is at the south end of the room, in the library. Take the red crystal at the southernmost end, then use the library gate switch for a quick way back into the main area.

The Lifeshadow Crystal is at the north end of the room, in the garden. Take the crystal at the bottom of the stairs, then use the library gate switch at the top to exit quickly.

From left to right, place the Mindshadow, the Flameshadow and the Lifeshadow Crystals. You can place the crystals whenever you want; you don't have to collect all three, then place them.

After the crystals are in place, enter the Ayleid King's prison and set him free.

Activate the first crystal prism to the left. Follow the light beam to the last crystal, the third lit one, and press it three times. Press the crystal that lights up five times. Repeat this process of activating the last lit crystal until the next one lights up until all the crystals are lit, and the prompt destroy the north receiver is complete.

Next, you need to do the same thing to the south receiver. Place the light of Meridia in the crystal prism in the southeast corner, then rotate the crystals around. For the second crystal from the southern receiver, make sure the beam of light is headed to the crystal closest to the receiver.

Destroying both receivers frees the King. Talk to him, then follow him as he limps to the eastern side of the room and opens a portal to the Hollow City.

Enter the door to the Fighters Guild Training Grounds, then climb the stairs and talk to the King.