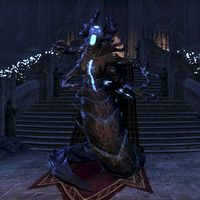 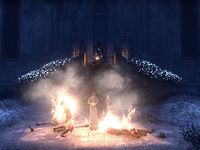 The Adjudicator is a large harvester found within the throne room of the White-Gold Tower. She serves as the first boss that must be defeated to continue. She has a chance to drop Harvest Dirk, a unique dagger. 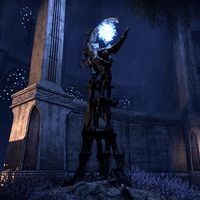 A pillar of judgement

As a boss type enemy, the Adjudicator is immune to all forms of crowd control effects.

Chasten
A basic ranged attack that does moderate magical damage.

Creeping Winter
The boss releases rows of hands that travel along the ground in the direction she is facing, occasionally bouncing off the walls at the side of the room. This attack does very high magical damage and should be avoided at all costs. Holding block will reduce the damage done to the player.

Soul Vortex
The boss stuns a player and places pools of fire around the room as indicated by red circles. This attack does moderate flame damage over time.

Bolt of Judgment
When these Nobles and Aristocrats are killed, their souls are stored in the pillars of judgement on both sides of the room. These pillars will occasionally shoot a bolt at all members of the party, doing moderate magical damage. This damage increases as the fight progresses and as more Nobles or Aristocrats die, thus the party has to defeat the boss before the damage becomes too great.

Coldharbour Justice
The boss throws the furthest player into a cage, located at the sides of the room. The cage is locked with an intermediate lock, and the player inside takes continuous flame damage. The player, or an ally, has to pick (or force) the lock to escape. Players are advised to have at least one lockpick on them just for the Coldharbour Justice mechanic. Putting points into the Locksmith skill can help as it increases the chance to force the lock instead.

The Adjudicator is associated with a few achievements.