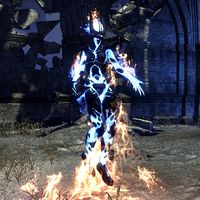 The Planar Inhibitor is a cold-flame atronach found in the White-Gold Tower. It serves as the dungeon's third boss. They have a chance to drop The Unbroken, a unique item.

Sear
The boss shoots fireballs at the player who closes the pinion doing minor flame damage. Players can stand near the boss without taking damage.
Scorch
The pinion shoots fireballs at all party members if left open, doing moderate flame damage to all players.
Heat Stroke
Closing the pinion will apply the Heat Stroke effect on the player, doing minor flame damage over time to him or her. This effect stacks as the fight continues, and can add up over time the longer the player holds the pinion. In the blue phase, the damage from Heat Stroke is increased. The Heat Stroke effect is removed from the player when the boss gets stunned later.
Cataclysmic Geyser
The boss releases pillars of flame around itself, doing high flame damage as indicated by red circles.
Effulgence
A flame burst attack inflicting minor damage that can stack up if used constantly.
Moth Vision
Sister Terran Arminus casts a spell on a player making their screen grayish, in the process revealing hidden portals around the room. The player must destroy these portals before they spawn enemies. Only the player with Moth Vision can damage the portals, although all players can see them. Destroying all portals before they spawn enemies will net players an achievement. It is advised that players with Moth Vision not touch the pinion, as dealing with both the boss and the portals can be overwhelming. As the fight progresses more portals will spawn, and more players will be given Moth Vision simultaneously.
Magma Diver
After the pinion is closed a few times, the boss dives into the ground, doing high flame damage in an area as indicated by a red circle.

After two Magma Diver attacks, the boss surrounds itself with blue flames and attacks the player who closes the pinion. Players near the boss will take high flame damage over time. The attacks from the yellow phase are repeated here, with an extra mechanic introduced.

Daedric Catastrophe
The player who closes the pinion is gradually snared over time, eventually becoming immobile. If the boss comes near that player, it will do very high flame damage to that player, almost always an instant kill. Other party members must close the pinion to distract the boss before it reaches its target.
Stun
After the pinion is closed a few times, the boss falls to the ground for a moment. All stacks of Heat Stroke are removed, and the party should take this chance to deal as much damage to the boss as possible. When the boss recovers, Normal Phase starts over, and the fight repeats.

There are a few achievements associated with this boss.