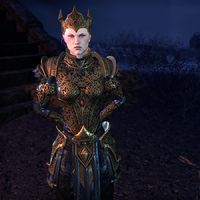 Clivia Tharn is the Empress Regent of Cyrodiil, daughter of Abnur Tharn and his seventh wife Pulasia. She is also the widow of former Emperors Leovic and Varen Aquilarios. Clivia and her bodyguards are currently planning to retake the White-Gold Tower from the Daedra.

As you first enter the Palace Sewers, you will overhear a conversation between the Empress Regent and Sister Terran Arminus, a Moth Priest:

If she is spoken to then, Clivia is dismissive of you saying:

"What are you? Some kind of vagabond? I have nothing to say to you."

After you agree to help verify, she is slightly more willing to speak with you, though still impatient:

"If that damned Moth Priest doesn't get moving soon, I'll move through her.
Get going. Maybe she'll follow. We need to retake the throne room, first and foremost."

Who are you?
"Don't you recognize the ruler of the Imperial Empire when you see her? I am the Empress Regent, and I've returned to claim the Ruby Throne from these Daedra.
They've sullied it long enough."

What's an Empress Regent?
"There's no hope for people like you."

You plan to retake the Tower? Why not call for reinforcements?
"These few here are all I could muster. My most trusted. The generals assure me there are more defensible targets than the Imperial Palace, than the Ruby Throne. They refuse to support this assault.
It's near-blasphemy."

If you are currently/have formerly been the Emperor, your responses following the "Who are you?" option can be different:

You can't be the Empress. I'm the Emperor/Empress.
"You're among the pretenders I hear so much about, passing the false title of ruler among yourselves like some lewd disease.
You sicken me. I will end the struggle in Cyrodiil today. As if one could force their way onto the Ruby Throne."

But that's what you're trying to do right now.'
"The throne is mine by right! Once we remove the Daedra from this Imperial property, I will rule from atop it once again.
Enough talk. Let's move."

I was the Emperor/Empress once.
"You're among the pretenders vying for the throne in Cyrodiil? You swine. You will never lay claim to that false title again.
When White-Gold Tower is mine again, I will restore order to the Empire."

Once Adjudicator has been slain:

"Yes, you killed a couple of fool Daedra. Must all peasants be congratulated for doing their work?
We have the Ruby Throne, but the Elder Scroll is still out there."
Where do we go now?
"You could ask out dear Moth Priest, but she'll tell you the Lower Library up ahead. She said she left the Elder Scroll there.
How these Daedra could have missed it … I don't know."

When the Lower Library is reached, the following scene will happen:

When you have caught up to the Empress Regent, reality seems to be breaking up and Sister Terran will plead with her to stop.

Sister Terran Arminus: "Stay calm! Everything you see is just your mind trying to make sense of merging realities!"
<Said to Clivia on the other side of the gate:>
"This won't end well for you, Your Majesty! Leave the Scroll stop this!"
Empress Regent Clivia Tharn: "You underestimate me, wretch!"

Once you reach the top of the tower to confront Empress Regent Clivia Tharn, she has some words for you:

Empress Regent Clivia Tharn: "Do you fools still believe you are dealing with Clivia Tharn? She is as lost to you as the White-Gold Tower!"

At this point she will transform into her true form, Molag Kena. It is unknown if the real Clivia survived the invasion. 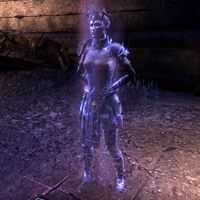 Throughout the White-Gold Tower are Speaking Stones which show conversations between the Empress Regent and General Velarius.