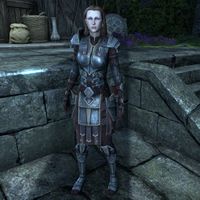 Safia Velarius is an Imperial found at the base of each Alliance inside the Imperial Sewers, near the ladders to the districts. She is the daughter of General Velarius.

"Do you have a moment? My father is General Velarius. He … he's missing."
My condolences.

"Clivia Tharn requested his presence. When you serve the Imperial Legion, you come when the Empress Regent calls.
Then came the terror you see in this city. He may still be in the White-Gold Tower. A prisoner, I hope."

How could I get into White-Gold Tower?

"There is no access from the districts. The Daedra blockaded all the entrances.
I've heard rumors of a way to get inside from the Imperial Sewers, but I've had no luck finding the entrance."

Many people are missing.

"I know. I have little hope he survives, yet … I still have hope.
Please let me know if you hear anything. I'm told he entered the White-Gold Tower. He may still be inside."

Once you have completed the White-Gold Tower, you will be able to tell her what you saw there.

"Do you have a moment? My father is General Velarius. He … he's missing."
I saw General Valerius in the White-Gold Tower.
"You did? Is he alive?"
I don't know. I saw a vision of him speaking to Clivia Tharn.
"Then he could still be alive.
Thank you for this kindness."