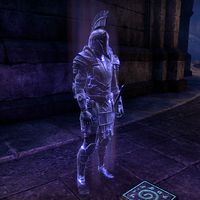 General Velarius is an officer of the Imperial Legion seen conversing with Clivia Tharn in a series of visions within the White-Gold Tower. He is Safia Velarius's father.

Throughout the White-Gold Tower are Speaking Stones which show conversations between the Empress Regent and General Velarius.

The first Speaking Stone, in the Lower Elder Scrolls Library:

The second Speaking Stone, in the Imperial Battlemage Quarters: