The UESPWiki – Your source for The Elder Scrolls since 1995
< Elder Scrolls Online: Quests: Craglorn / Side Quests
Jump to: navigation, search
A giant object fell from the heavens when the Mage constellation disappeared. Sara Benele is examining the object, which she calls the "Mage's Staff." She believes the staff is unstable and needs my help to fix it. 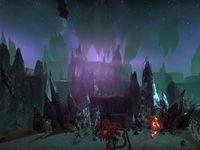 Inside the Mage's Staff 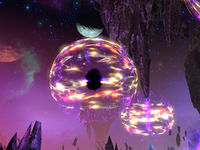 The core has been stabilized

When you discover Spellscar for the first time, Sara Benele runs up to you. Her sister, Gabrielle, told her you aren't afraid of danger. Sara wants you to stop the large staff, which the locals call the Mage's Staff, from emitting magical energy. If you don't, it will explode. The staff fell from the sky just before the constellations vanished, and it is drawing every "magic-addicted sorcerer and atronach in the region" to it. In order to stop it, you will need to find a way into its core. This will require a large amount of magical energy. You need to bring three elemental infusions to Sara. Kill the fiends and quickly harvest the infusions (flame, ice and storm).

You will see a focus crystal for each of the three infusions. You will have to activate each one, followed by the staff infusion. Sara uses a spell on the staff, opening a portal to its core.

Inside the Mage's Staff[edit]

You need to make your way to the core and stop it from overloading. However, some atronachs and spellfiends have gotten inside the staff. Defeat them, and head toward the core.

Once you get close enough, Sara will start to disable the core. You need to "protect" her as she does this, so defeat Magdra Tigun, a flame atronach, at the first level; Nomeg Nulu, a frost atronach; and Zymel Ozata, a storm atronach, at the final level. It is necessary to defeat all three of these bosses in sequence without a group wipe (or, if you are playing solo, dying, which is technically a group wipe of just one person), to complete the quest. If you are defeated while fighting Nomeg Nulu or Zymel Ozata, you will have to start over again at the fight with Magdra Tigun.

Take the portal back to Spellscar, and talk to Sara.

Notes
* Any text displayed in angle brackets (e.g., <Alias=LocationHold>) is dynamically set by the game and will be filled in with the appropriate word(s) when seen in game.
Retrieved from "https://en.uesp.net/w/index.php?title=Online:Critical_Mass&oldid=2650330"
Categories:
Hidden categories: