This article is about the enemy in Hel Ra Citadel. For the friendly version, see The Celestial Warrior. 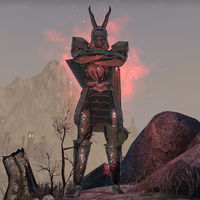 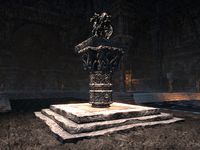 The Warrior in his Hall, prior to combat 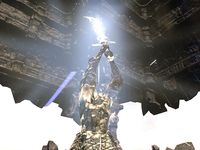 The Warrior is one of the three guardian signs who protect Tamriel from the Celestial Serpent. However, before the events of Craglorn, the Serpent corrupted the Mage and the Warrior, turning them against Tamriel and into agents of chaos.

The Warrior resembles a large soldier with a Yokudan mask. He is encountered throughout the Hel Ra Citadel, and is the final enemy of the trial. In it, he is fought in his stone-like Anka Ra form within the Hall of the Warrior, the final chamber. Upon defeat, he will turn into a pile of dust and speak to The Thief, saying he is free from the Serpent's control.

The Warrior chases one enemy and attacks them with his sword multiple times, and can easily kill them with just a few blows

The Warrior casts numerous electric bolts at each player, dealing a great deal of damage with each one. This attack can easily be countered by blocking with a weapon, which will greatly reduce the damage done.

Getting rid of his mace and shield, the warrior quickly corporealizes a powerful Shehai Sword in his hands, building it upwards. Once the sword is fully summoned, it causes an explosive shockwave that blasts open the walls and knocks players back.

Entering the Citadel and beginning the trial:

The Warrior: "The Warrior and his army of old Yokuda claim the Citadel of Hel Ra! Leave—and live. Trespass—and die. You have been warned."
The Warrior: "My soldiers of sand and steel will strip your flesh!"

The Warrior: "You have come farther than those feeble Undaunted. But you will fall just the same."

Ra Kotu comes out of the citadel to face you in battle
The Warrior: "Air and sand can cut like blades in the wind. Ra Kotu will prove this!"

After being defeated, the weakened spectral form of the Warrior will appear and kneel at the platform in the center. The Thief and, if the Aetherian Archive has also been completed, The Mage will appear. Their dialog depends on the completion status of the other two Craglorn Trials, Aetherian Archive and Sanctum Ophidia.

The Warrior: "The Serpent no longer clouds my mind. My sword will claim his neck."
The Thief: "The Serpent belongs in the natural order. We will stop him, not murder him."
The Warrior: "All talk and no action. Fall in behind me. The Serpent will learn his lesson."

The Warrior: "My eyes are finally clear. My sword will claim the Serpent's neck."
The Thief: "The Serpent belongs in the natural order. The three of us will contain him, not end him."
The Mage: "Then we should return him to his Apex Stone. And seal it properly. Thrice—if we have to."
The Warrior: "To the Serpent's Stone, then. Fall in behind me. The snake will learn his lesson."

The Warrior: "My mind is free of the Serpent's thrall. My sword hungers for his neck."
The Thief: "The Serpent has been confined to his Stone. Now, come. There is still the Mage to free from his influence."
The Warrior: "That is hearty work—for a Thief. Fall in behind me. I will lead us to glory."

The Warrior: "The Serpent no longer clouds my mind. Eyes clear, my sword will claim his neck."
The Thief: "The Serpent has been confined to his Apex Stone, and the natural order is restored. But his attention will turn elsewhere. We should depart."
The Warrior: "Surprisingly efficient. For a Thief and a Mage. Fall in line behind me. I will take charge from here."
The Mage: "How gracious of you."
The Thief: "We should depart."

After the Mage is defeated in the Aetherian Archive, the Warrior may appear if the Hel Ra Citadel has be previously completed.

The Mage: "My thoughts are my own again."
The Thief: "It has been some time."
The Warrior: "Not long enough."
The Mage: "The Warrior—how quaint. Where is the snake? I owe him a fiery spell for this."
The Thief: "Defeated—locked away in his Apex Stone, but his attention will turn elsewhere. We should depart."

After the Serpent's physical form is destroyed, the Warrior may appear at the Apex Stone with the other freed celestials.

The Serpent: "No! The mortals must perish!"
The Warrior: "It is done."
The Thief: "Even the two of us could not break this new seal on the Stone. The Serpent will never enter this plane, again. Let us depart—the Mage remains in the Serpent's thrall."

The Serpent: "No! The mortals must perish!"
The Warrior: "It is done."
The Mage: "The Serpent could not break this new seal with the blood of a thousand mortals. He will never return to this plane."
The Thief: "But his attention will wander elsewhere. We should depart."

Destroying the statue that buffs healing

Breaking the statue that buffs dps