The UESPWiki – Your source for The Elder Scrolls since 1995
< Online: Places: Craglorn / Group Events / Ruins
Jump to: navigation, search 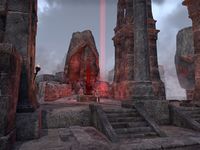 The Anka-Ra Burial Sites are five ruins in western Craglorn. They consist of a small, partially-enclosed area with a red beam of light coming from an altar in the center.

Speaking to the nearby Star-Gazer Priest activates a boss fight where players must repel several waves of enemies. Enemies will attempt to reach the center and kill the priest. The event ends if the either the priest is killed or all the enemies.

Survive the event for a treasure chest that will appear near the altar. Also, a "Consectated Aura" near the altar can be activated to receive the Yokudan Might buff for 1 hour, which increases your damage done by 8% while in Craglorn.