The UESPWiki – Your source for The Elder Scrolls since 1995
< Elder Scrolls Online: Quests: Craglorn / Side Quests
Jump to: navigation, search

Outside the school of blades called Rahni'Za, I encountered an initiate of the school who told me that the Sword-Disciples have been turned into thralls by a traitor. This betrayer now hides in the cavern at the end of the school's five trials.

When you approach the School of Rahni'Za, you will see a Redguard warrior called Fada at-Glina kneeling in front of a little tent. She is mourning the fallen warriors inside the school of warriors.

"Will you say a prayer for those who have fallen behind the walls of Rahni'Za, the great school of blades?
For the great Sword-Disciples, who have been reduced to mindless thralls?"

"Rahni'Za was once one of the great sword-schools, rivaled only by the Abbey of Blades.
But a betrayer gained entry through deception and trickery. He turned the mighty Sword-Disciples into thralls of the dread Celestial Serpent."

How did the betrayer do that?

"The initiates of Rahni'Za prove their mastery by completing five increasingly arduous tests of strength and skill.
I do not know how he did it, but the betrayer overcame the trials and killed Master Timen."

Tell me where to find this betrayer.

"I'd only finished the first trial when the betrayer struck, but it stands to reason that he's in the most secure part of the school-the cavern at the end of the final trial.
You'll need to complete the trials in order to avenge us."

New Task: Trial of Braziers — Summon spirits from tombs and lead them to light braziers.

The first task is to lit three braziers to gain the entrance to Rahni'Za. To do that you need to summon warrior spirits from the tombs nearby and lead them to the braziers. The braziers are guarded by Sword-Disciples, senche-tigers and gargoyles. When this is done, Kalith, a champion of the Trial of Fire, appears near the final brazier, yelling "Face me, initiate. Prove your mettle in the Trial of Fire." You will need to defeat him in order to gain access to the school. Kalith is assisted by three gargoyles who engage in the fight when he is at about 30%. He will also summon Illusions of Kalith and occasionally cast a powerful Guardian's Wrath attack. Upon death, Kalith grants you access to the school, saying, "You have bested me and completed the Trial of Fire. Enter Rahni'Za, initiate, and face the remaining trials."

Task Completed — You lit the braziers and completed the first trial. 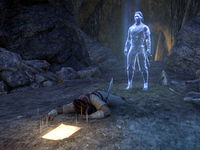 "Who are you? Have you come to avenge us?"

As you have defeated Kalith, you can now enter Rahni'Za. Not far from the entrance you will encounter the spirit of Zabeth, a former initiate of the school.

"Who are you? How have you come to avenge us? You will find few allies here.
Abelazar the betrayer has turned all of the Sword-Disciples into thralls. He would have turned me as well, if I had been less of a coward."

"When the betrayer struck, the Sword-Disciples held fast to their honor and took up their blades against him.
For their efforts, they were turned into a mindless army. But I took the coward's way. I fell on my own blade rather than join Abelazar."

What can you tell me about Abelazar the betrayer?

"He came among us as an initiate, seeking to master the trials and win the right to be called Sword-Disciple.
He was the best I'd ever seen. The way he moved with a blade, it was mesmerizing. But it was all a lie."

"His allegiance was to the Celestial Serpent, not to us. His mastery was deceptive magic, not skill.
When he reached the end of the final trial, he murdered our master and used foul magic to turn the Sword-Disciples into thralls."

"The thralls are neither living nor dead. They answer only to the Serpent's will.
It's too late to save them, but you may give them rest by killing Abelazar and destroying his master, the Serpent."

You can also ask Zabeth more about the trials that await you inside Rahni'Za,

What can you tell me about the trials?

What is the Trial of the Arena?

"A test of stamina and pacing. The easiest of the three - if you have good allies by your side.
The arena master is a spirit who has dwelt in this place since its founding. He wasn't affected by all of this. He'll tell you all you need to know."

What is the Trial of Air?

"I never completed the Trial of Air. The other initiates told me of a hidden path across the tops of the school's buildings. It can only be seen when special sands are thrown upon it.
Where the path leads, I can't say."

What is the Trial of Martial Knowledge?

"On entering Rahni'Za, we were each given a book describing the trials. There's a place in the library for each of the books.
As I understand it, only those who managed to acquire a complete set could complete the Trial of Martial Knowledge." 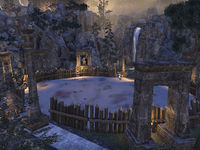 Face the challenges in the Arena

The Trial of the Arena[edit]

New Task: Trial of the Arena — Defeat the opponents of the arena

The Arena is to the northeast of the entrance. You will be greeted by Master Nadar, announcing, "The arena is open to challengers! Let the melee begin!" Speak to Nadar in order to start the event,

There will be several waves of warriors and beasts which you need to defeat. In the end you need to fight two of the following Arena Champions: Adayyul, Adit, Ireh, Ladra, Marwa, Nimlanath or Nalana. They hit heavy in melee and use immobilizing and stunning attacks which you need to be aware of.

Task Completed — You've survived the arena and completed the trial

Proceed east past the Arena circle towards the Beast Pits — this is where you will find one of the books needed for trial of Martial Knowledge. To get to the book you need to fight a big wamasu, Wapzgin, two duneracers and some Sword-Disciples assisting it.

Task Completed — You have defeated the master beast, Wapzgin

The book, The Trial of the Arena, is right next to Wapzgin. Exit the pits and proceed back to the Arena. You will see Master Timen, the murdered schoolmaster near the Arena. He will tell you that he did not believe anyone would take up the trials, and is glad to see you have come to avenge the Sword-Disciples. Timen explains that The Serpent and Scaled Court saw the warrior school as a threat to their plans. Thus they sent one of their members, Abelazar, as fake initiate to the school. Abelazar murdered Timen and placed a curse on the Sword-Disciples, turning them into thralls.

After talking to Timen, head west to the area that leads to the next trial. The second book required for the trial of Martial Knowledge, The Hidden Trials can be found on the training grounds between the two buildings: the armory and the barracks. The third book, The Trial of the True Path is in that same area, on the roof of the barracks which is the western building. 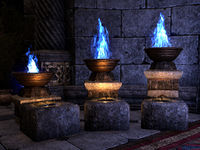 Light the braziers inside the library to unlock the Master's Study

New Task: Trial of Air — Use the Sands of True Sight to Reveal the Way

Head to the quest marker in the northwestern corner of the area to start this trial. Use the Sands of True Sight, which drop from the NPCs: these will reveal hidden pathways to the areas not accessible otherwise. First, make your way to the northwestern corner to get the fourth, last book for the trial of Martial Knowledge. To do that, you will need to defeat Birdmaster Dehanar and his Birds of Prey. Loot the book, The Trial of Air from Dehanar. You have now collected all needed books.

Then head southwards using the sands. When you climb up to the last part of this trial, Master Timen appears again and you can talk to him. 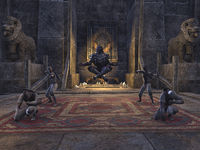 "Test your knowledge of the art of the blade against me!"

The Trial of Martial Knowledge[edit]

New Task: Trial of Knowledge — Place the Trial Books to Open the Way and Defeat the Master

Head towards the northeastern part of the area where the Rahni'Za Library lies. There are six pedestals, but two of them are already lit - Trial of Martial Knowledge and Trial of Fire. You can however activate the pedestals to read the books and collect them in your Eidetic Memory. Place the four books you have collected on the altars to open the way inside the Master's Study. If you didn't read them before when they were in your inventory, you can do so now. There is another Master inside waiting for you - Master Abrunul and a couple of Sword-Disciples. After you have defeated him as part of the trial, Master Timen once again appears - you can speak to him if you want to. You now have only one task left to do.

Task Completed — You have Defeated the Master of Martial Knowledge 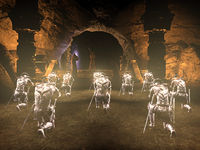 "Even now, there are those who dare to challenge me."

The Trial of the True Path[edit]

Enter the cellar of the library. This final area will be covered in darkness, so you need to activate a nearby orb of light to summon a Guardian of the True Path, a spirit who will show you the way. You need to be within the Guardian's lit aura, otherwise you will take damage from the surrounding darkness. During the walk you will be attacked by some wraiths and Lost Students.

In the final room you will find Abelazar, guarded by two snakes and preaching to a group of Lost Souls, who are essentially the enthralled Sword-Disciples. Abelazar is a caster-type boss, using Void and Winter's Reach among other attacks. During the fight the room will be darkened but the Guardian of the True Path will appear, to help you see in the darkness.

After you've defeated Abelazar, Master Timen appears and you will be named an honorary Sword-Disciple, as you have completed all the trials that a disciple needs to, and you have helped the school to deal with the betrayer. Speak to Master Timen, then exit via the portal behind him. Head back to Fada to inform her that you have rid the school of The Serpent's corruption. She ponders, "You stand before me, not wounded and defeated, but proud and courageous. You have overcome the trials! But what happened to the betrayer?"

I defeated the betrayer, Abelazar of the Scaled Court.

"At last. Although it does not end the suffering of my fellow Sword-Disciples, at least the Serpent's foul poison will spread no more.
For my part, I will wait here until it is safe to enter, bury the dead, and see if I can carry on their legacy."

Notes
* Any text displayed in angle brackets (e.g., <Alias=LocationHold>) is dynamically set by the game and will be filled in with the appropriate word(s) when seen in game.
Retrieved from "https://en.uesp.net/w/index.php?title=Online:The_Trials_of_Rahni%27Za&oldid=2628484"
Categories:
Hidden categories: