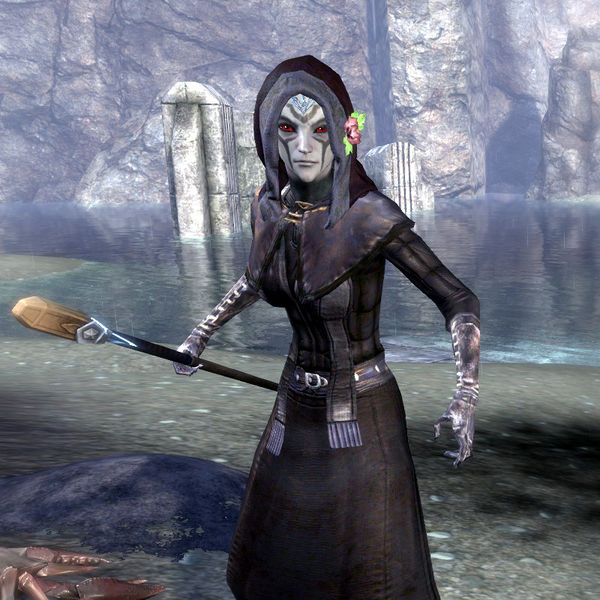 The preliminary looks of my necromancer, for the upcoming Elsweyr Chapter.

Some of my work[edit]

Some of my screenshots that I really like[edit]

People and creatures... and so
Statues and interiors
Exterior images

Tibbie has completely lost it with Blade of Woe[edit]

Some of my favorite ESO dialogue

Are you a blacksmith?
"No, I'm their bard, but I lost my lute so I thought I'd improvise with a hammer and an axe.
Of course I'm their blacksmith! Now go bother someone who likes to talk."
You don't have to be so grumpy.
"I'm not grumpy. I have a wonderfully sunny disposition.
Now get lost before I accidentally hit you with my hammer. Twice."

"That oily fat cat tried to bribe me with a fine wine to keep an eye out for you! ... Of course I took his bribe. Why do you think we're talking?" - Andarri
"Don't you walk away from me. Yes, I'm drunk. I'm very drunk. I even threw up over there in the corner. But that doesn't make you better than me. Nobody's better than me. I'm a perfect drunk!" - Mylo Bertault
"Wait ... wait. Where'd my tail go? Did you—oh, there it is. Close call." - Laughs-at-Turtles
"This one does not care what his sister says. Tonight: this one and a bottle of Two-Moon Cordial. It's a date." - Mulabzag
"Of course this one is drunk! But we can still make a deal, yes?" - J'zuraar, the fence in Belkarth

"Hello ... you! Good to see another Undaunted. I've been drinking my way through all the places Undaunted dwell.
The drink here is surprisingly strong. An hour ago, I thought I had become a Khajiit. But I was just looking at one. She set me straight." - Wandering Jakalor, an Undaunted drunk in Elden Root

1 - Tracking all possible things, haven't used it some time now though. 2 - Gonna use it for writing bigger pages or lore. 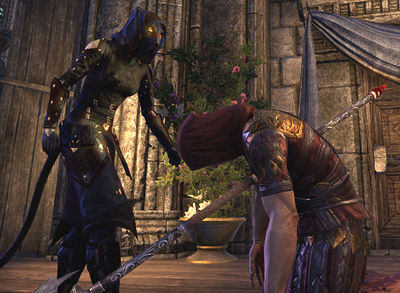 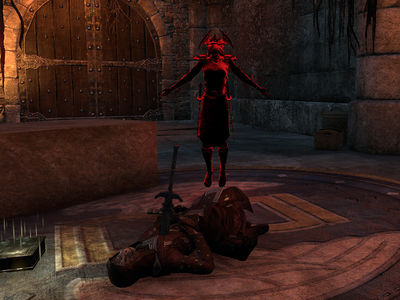 "I will not beg mercy from the likes of you."

After finishing this quest line, I don't really feel satisfied at all. Simply because I don't actually care about Artorius although he is the de facto antagonist in this little power struggle on the Gold Coast. It is the Black Dragon who steals the spotlight in this story. Her character is, for me, one of the most interesting ones in ESO. She is broken, and she is suffering as she tries to hold on to the last thing reminding her of her humanity (Green-Venom-Tongue).

You can only imagine what it feels like to lead a life like hers. (Well, not only imagine, since you'll be given a glimpse of the events that made her who she is) I REALLY wish we had a couple of choices in the end, when you hunt her down in Knightsgrave.

Her fate really makes you wonder about the relativeness in good vs evil. Which was likely the whole point when the Brotherhood content was designed. This quest line is really cool, spot on with the theme if you ask me :) I'm also completely sober writing this *nods*. 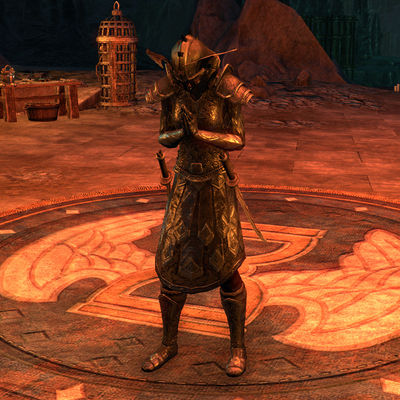 "And here we are. I'm ready to die. Let's see if you're good enough to kill me."

To All Who Pass Through[edit]

A lot of things going on! My power supply broke, but thankfully nothing else is broken. So many things to do IRL, plus Civ VI is out! Although currently bit unbalanced (you can beat Deity quite easily, among other things..), it's still a kickass game. And I tried out Heroes VII latest DLC Trial By Fire! Aand, we might be buying a house soon which is scary. I'm still here though and will contribute where I can :) Tib (talk) 12:03, 5 November 2016 (UTC) 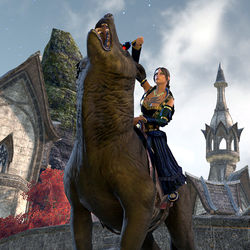 "And who do I have the pleasure of being saved by?", the obviously relieved traveller asked, trying to ignore the rescuer's unconventional clothing, including a prominent cleavage.

The Breton carefully wiped off Daedra blood from her iron sword, and turned around to measure the traveller. This is a rather good-looking male body, she concluded. Let's hope he wants to buy me a drink.

The traveller was just about to offer to buy her a drink at the nearby inn, when he was given a very nonchalant staggering nudge from behind. "Hey! What is this—" he choked on his words, staring into a pair of glowing red eyes.

Mabrel snickered softly. "Careful around Nightfur. He can be very protective at times."

Meet my Templar, an all-in-one character, who I'm planning to play all three roles at once with. Also, she's way out of, well, any league haha :D 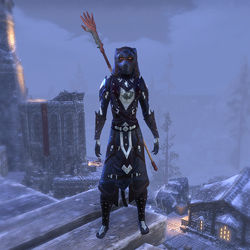 The whole Dark Brotherhood theme is really getting to me. And the Blade of Woe animation.. I predict a new Featured Image coming from one of these action shots (not necessarily mine, but generally speaking) 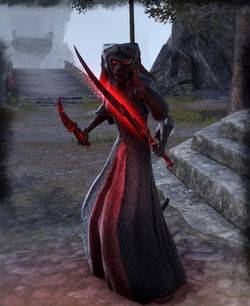 "I didn't ask for any of this! And what's up with that stupid dress?"

Something was simply not right.

Tibbie, the sixteenth-fold veteran of Aldmeri Dominion, Slayer of Undead, Savior of the Nirn, Maelstrom Arena Champion, and the secret love interest of Razum-dar (let's not talk more about that) was now sure she'd somehow contracted Witbane, Ash Woe Blight or some other horrible disease.

She could not explain why one day she started to act strangely, going to the places she had no plans to visit and stopping for long moments to stare at creatures she would otherwise simply hack and slash or pass by without as much as a shrug. Or buildings. Boring, tall, stone bricks, wood, cobwebs, skeletons and all that. Truthfully, she got a headache after staring at some insignificant Dwemer ruin for what seemed like an eternity. It was as if almost somebody else controlled her Khajiit body, forced it to stop, sneak, climb or do other (potentially embarrassing) things. If she didn't know better she'd think somebody was remotely using her for gathering information about her surroundings - the places, the people, the nature, the dangerous creatures.

Sounds like utter nonsense.. I've got a disease or two for sure, she thought anxiously, when she suddenly remembered rumors overheard in a remote Riften tavern crowded with Nord (who else?) drunks. (No, it was not Fredas. It was still crowded.)

There could only be one explanation. Yes, that was it!

Tibbie had heard rumors of the fellow adventurers across all factions who were believed to be chosen by an unknown scholar cult from a parallel dimension to gather information about her home world. Every piece of information, every creature, building and plant would be thoroughly assigned and evaluated by those Breton-like pale figures, who would spend hours sitting behind their advanced digital calculating machines, describing and discussing Tamriel, if not the whole Nirn itself. Why on earth anyone would waste their time on this was beyond the Khajiit's comprehension. She only knew she was chosen and she had to accept her fate.

Ahem... on to those damned catacombs of Skyreach then! she sighed. Good research doesn't just come knocking at your door, after all. We wouldn't want the world - err, the other worlds - to get some wrong ideas about Tamriel anyhow. She gazed upon the stars as if waiting for a response. There was only silence.

These bloody scholars - Wikians, or whatever they now were called.

I started to edit here in December 2015 when I noticed there are some Orsinium Contraband items not listed on the page yet.

Shortly thereafter I went to explore the Craglorn Adventure Zone because I was busy with other things (PvP!) when the zone was added in 2014, plus I had a rather long break from the game as well. I noticed how many things still needed to be added and started doing it.

I have now worked mostly on one area at a time, in the order of Craglorn, Thieves Guild, Dark Brotherhood, also a little bit of Orsinium and a few other things. Shadows of the Hist is such a small DLC, so not much to do there, but I'm really looking forward to the Q4 update, and hoping we will get more content then :) If it's Vvardenfell, it's gonna be quite a trouble though, because I know little about this region.

About 65% of my contributions are to the Online pages, and about 25% are Online image uploads, the percentages have been quite constant.

A little list of what I've been working on here so far! I focus on a specific location where I add big chunks of information and I get obsessed at discovering every piece of relevant information.

Proof that I can't spell[edit]