Hello, I am Vordur Steel-Hammer and I'm from Poland. I'm mainly interested in the integrity of the lore, especially in creating "bridges" between ESO and the previous content. If you find something interesting (eg. an inconsistency or an unusual reference), let me know!

Maps of all currently known Ayleid and Dwemer Ruins:

The map of Dwemer ruins does not include unnamed ruins inside caves (Sightless Pit, Tolvald's Cave). Also, Bamz-Amschend is marked where Mournhold is in ESO, not where it is on the background map.

Complete maps of the provinces of Valenwood and High Rock circa 2E 582:

This rough map is an attempt to summarize all the current geographical knowledge of Tamriel. I will try to update it as new regions in ESO are released. 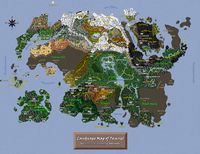 Below are the maps showing all Ayleid and Dwemer ruins using the Landscape Map as a base:

This table lists the most important towns and cities of Tamriel, which were mentioned or appeared in the games set in Third Era AND exist in or before the time of ESO, along with at least one source mentioning each of them. Green fields indicate ESO-specific sources, yellow fields indicate earlier books which reappear in ESO.

Places from Arena and Daggerfall reappearing in later titles[edit]

Note: Markwasten Moor is mentioned in ESO-specific books as the site of the final battle in which Ranser's troops were defeated, which would mean it's an alternative name for Traitor's Tor. Howewer, there is also a subzone in Rivenspire named Westmark Moor, which is similar enough to suggest that Markwasten Moor was an earlier name for this subzone, which was changed later in the development.