This article is about the geographical region. For the political entity, see Gavaudon (fiefdom). 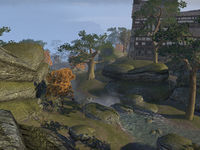 Gavaudon is a region in central High Rock, within the larger region of Stormhaven. It borders Menevia to the west, Wrothgar to the north, and Mournoth to the east. The region contains the town of Wind Keep, the Ayleid ruins of Norvulk, as well as the enormous ruined statue called the Weeping Giant.[1] It is the home of the Dumontes, an old clan known for having a considerable familial connection with the Direnni.[2]

Gavaudon offers rich alluvial soil due to the Bjoulsae River flood plains, but the threat of vampire attacks and Orc raids from the mountains weeds out all but the most hardy frontiersmen. Around 2E 582, the region was considered a fiefdom.[3]