Go to sleep again and Ria Silmane will speak to you:

"It has become a habit, congratulating you on your success. Still, there are three pieces left, and what guards them only the Divine Lady may know. I have spent many a day searching the ethereal planes for some clue as the location of the sixth piece of the Staff. This is what I have found. The piece was sent to a place called the Crypt of Hearts. I have no clue as to the location of such a place. The price for the little knowledge I have was... exacting. Still, only three provinces remain that can hold these last pieces. It can only lie in one of these. Good luck..."

Asking around about the Crypt of Hearts leads you eventually to the Brotherhood of Seth in Camlorn, High Rock. There you are told by Halfas Varn that one of their junior members went mad, talking about how the Emperor was kidnapped and he needed the Staff of Chaos to free him. He fled with a map telling them where the Crypt is, and they know where he went. If you agree to get the map back, they mark the location of the Mines of Khuras on your map.

The mines are located a short way southeast of Camlorn. This is a bi-level dungeon with huge levels. You will find lava in abundance as well as magic-, fire-, and shock-throwing monsters, so ensure that you have plenty of defensive magic (potions, spells, or magic items) on hand. Because spell-throwing monsters can kill you while you're climbing out of a pit, it's also very helpful to have Levitation so you either stay out of pits or, if you end up in one, don't have to laboriously climb out.

On the first level, the way down is more or less in the center of the dungeon. Levitation is a big help in negotiating the puddles of lava that are abundant here. You could jump over them, but it's often difficult to do that without landing in another flaming puddle on the other side.

The fastest way down is to head west in the first east-west corridor and take the first opening south. Immediately work your way a short bit back east, then go south quite a way. Eventually you should see the blue dot that shows you where to go down (51,58); it'll likely be a bit east of where you're going south.

The second level, while it thankfully has little lava, has pits a-plenty and not a few tunnels; it is very maze-like, dark, and difficult to navigate. You can find the map fragment (and what's left of Brother Barnabus) in the southeast (the small room above the 'BLACKMARSH' tunnels) of the level (21,86). Your best bet is to take the trench south of where you entered to where it comes out, then make your way south and east as best you can.

Back at the Temple, return the map and the brothers will mark the location of the Crypt of Hearts on your map.

This is a four-level dungeon. The first level is quite large, though the lower levels are smaller. Every type of undead are plentiful here, as you might expect. There is also a large number of the most deadly of monsters, the stone golem. This dungeon is easily the most difficult so far, and the fourth level is especially challenging. Passwall is particularly helpful here, because many of the levels offer a shortcut to the exit if you have it. Bring as many Potions of Heal True as you can. A couple of Potions of Invisibility can protect you from the stone golems of the bottom level, which might not spot you right away. Resistance potions and a lot of Potions of Levitation will be beneficial too. The dungeon doesn't really offer much treasure, even if you'll find dead bodies from time to time, sometimes including nice magical items.

The way down on the first level is in the north center of the level. Make your way west while staying as far north as possible and you'll quickly find it. This level also holds another chance to meet your first vampire, if you didn't meet one already in the Crystal Tower (he will be located in the half-circle room in the center of this floor).

The second level is quite small in terms of actual area to explore. The way down is in the southwest section. If you have Passwall and don't want to explore, it's worth cutting your way south immediately, skirting the pit of floating floor tiles, and then making directly south for the way down. Otherwise make your way east down the long corridor on the north section, then back west as you can.

The third level is also small. Again, if you have Passwall and don't want to explore, getting to the way down is a snap; you can probably see the blue dot on the map as soon as you enter the level. Cut through the wall right behind where you entered. If you don't have Passwall, you'll have to go a way north and east, then down a very long corridor south and, eventually, back west.

The fourth level is larger and more problematic. It is heavily pocked with trenches and pits, so Levitation is an enormous help, particularly when having to deal with the very dangerous (especially while distant) stone golems and wraiths. The Staff piece is in the center of the level. If you have Passwall, you can immediately head north, cut through the east wall, and instantly find yourself in the area where the Staff piece room is. This is highly recommended; also use invisibility to get through to the Staff piece room without being attacked. Otherwise, you are in for a long trek east, then a long trek north, then a long trek west, then a shorter trek south before you can get into that area. Once in that area, there are more fell beasts and automata, plus of course a riddle-locked door (answer: shadow) and the Staff piece (30,32).

After arriving back in town, Jagar Tharn will send a monster to kill you and a vision to warn you:
"You have rejected my offer of everlasting life, and defeated the Crypt of Hearts. Your list of accomplishments grow. You will not however, accomplish the forging of the Staff. My forces are inexhaustible, and you will succumb. Prepare, for my servants arrive..." 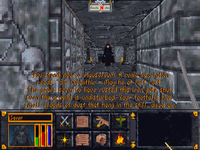 Sir Culanthir - May he at last rest 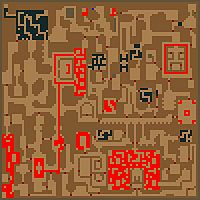 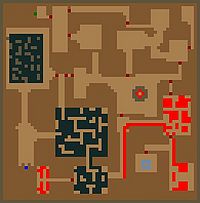 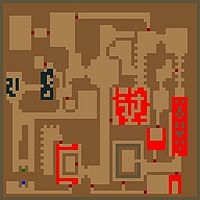 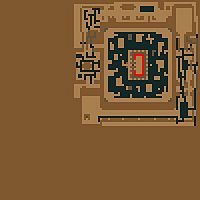