Ria Silmane will visit you the next time you sleep after retrieving a piece of the Staff of Chaos from Elsweyr. She will tell you:

"You have recovered the fourth piece! I honor your bravery. Listen closely now my friend, for Tharn has begun in earnest to look for you. Do not fear, he does not know your true identity, but he can sense the Staff's power. With four of the eight pieces, you stand out like a lantern at night. I urge you to caution. The fifth piece of the Staff lies in an ancient stronghold of sorcery called the Crystal Tower. It was said that the southern tip of the Dragon's Teeth, which stretches from the ice covered mounts of High Rock to the wooded forests of Valenwood, could be seen on the horizon from the top parapet of the Tower. This would lead me to believe it is not far south of the majestic mountain range. You must find the Tower and gain access to recover the fifth piece of the Staff of Chaos..."

Asking around about the Crystal Tower leads you eventually to the Mages Guild in Lillandril, Summerset Isle. Corim Ashlen, the Loremaster of the Guild, tells you that they had a diamond that would tell them where the Crystal Tower is, but it was stolen by the Priests of the Mad God. The Guild also drew its power from this diamond; without it, they dare not try to get it back. If you agree to do their job, the location of the Temple of Mad God is marked on your map.

Temple of The Mad God[edit]

This temple, located a short way southeast of Lillandril, is a bi-level dungeon with medium-sized levels. It is full of the undead and monks, but they are not much more difficult than the knights of the Temple of Agamanus in the previous quest. There are not many treasures here; in fact, this dungeon is almost empty, so there is no real need for exploring.

On the first level, the way down is in the south central section of the dungeon. There's a lot of water on this level. If you choose to follow the water far to the west and then south and then east, you will find the way down no problem, but it's definitely the longer and more dangerous way. You can stay on the floor and make your way south and west (but not too far west) and you'll get there more directly and with fewer encounters.

The second level has a normal layout, but is quite large. The diamond is in the northeast section of the level. You want to head more north than east, as there are some dead ends if you go too far east. Thanks to the regular layout (no pits, no water), it's not hard to find.

When you get to the room with the diamond, answer the obligatory riddle (torch), grab the diamond (16,3), and get back to Lillandril.

Back at the Mages Guild, return the diamond so they can mark the location of the Crystal Tower on your map.

"The Crystal Tower dominates the area, rising like an accusatory finger pointing at the sky above. This bastion of sorcery seemingly transcends normal human conceptions, existing in many planes other than this. You can sense the fifth piece of the Staff of Chaos, somewhere above..."

This dungeon is the reverse of all the other dungeons you've found so far in that you have to go up. Therefore, you are looking for green dots on your dungeon map rather than the blue dots you're used to searching for. In preparation, you may need lots of Potions of Heal True, Potions of Resist Shock (for use against homunculi), and a few Potions of Free Action (for use against medusa and spiders). Potions of Resist Fire could also be helpful, depending on your chosen stats and class.

The Crystal Tower has four levels. They are all small, though, so at least it doesn't take long to fully explore each of them and pick up their many treasures. The treasures here contain a lot of magic items, such as torcs, bracelets, and crystals.

The way up on the first level is in the northwest section. If you have Passwall, the most direct way is to just cut through straight north and loop a bit east. Otherwise, make your way around as closely west as you can. The last corridor that leads to the exit, is the home of many trolls. There is a chance you will meet your first vampire on this level. He's a very tough fight, and powerful magic is needed to beat him. Like with trolls, weapons can hurt him, but not defeat him. It's best to avoid him if you can't magically harm him, as his fireballs can cause a lot of damage.

The second level is curiously icy, and ice creatures abound. The way up is in the northeast corner. If you have Passwall, you can just head east and cut through the wall. Otherwise, when you get to the east wall you will have to make your way south and then back north. Here you will face many ice golems and homunculi. There is a room on this level where, if you enter it and the door closes behind you, you cannot then leave the room by normal means. There's no need to enter it at all, though, because it only contains one ice golem and one pile of treasure. There is a trench in front of the door and you cannot reach the door from the other side of the trench. If you are in this room and the door is indeed closed, there are only four ways out (short of reloading the game):

The third level is possibly the most interesting of all the dungeons: it's a zoo! Interestingly, there are buttons for each section, with which you can unlock all doors. This is not necessary, though, since you can open all but two doors by yourself and kill the monsters one by one. There are monsters (including medusa and a stone golem) in cages with troll zookeepers guarding them.

The trolls, which lurk mainly by the buttons, are important: they carry keys. There is one magically-locked door that cannot be passed without a diamond key; it is in the southeast, and behind is the way up. Any of the trolls might carry a diamond key (it's random); loot each corpse to find the key. There is another troll that carries a steel key (initially at 43,33, but he'll move to you if he sees you), and that key unlocks a door to another area (35,45). You can also find a steel key in one of the medusae in the southwestern cells.

Open the diamond key door (7,45), defeat the fire daemon awaiting you behind it, and go up.

The fourth level is more mundane. It also has a steel key lying around (2,23) and a steel key door (48,43). The key is not necessary, but it's a somewhat shorter path to the Staff piece if you can get it. Go north to get the key, then go back south and go west while hugging the southern wall. Cut north when you have to, then loop back around to the room with the riddle door (the answer is Egg) and the Staff piece (36,37). If you can't find the key, just take the long way around north, then west, then south. Behind the door to the staff piece, you'll encounter two wraiths.

You will receive yet another ambush from Jagar Tharn, but this time his tone is changed:
"I have underestimated you, that is clear. You have not only defeated the useless creatures I have sent against you, but managed to survive the Crystal Tower, a feat that in and of itself could be legend. It is sad that I am forced to destroy you. Prepare, for my minions arrive..." 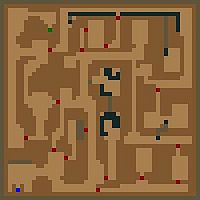 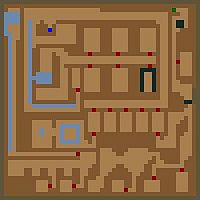 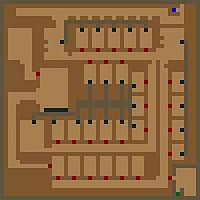 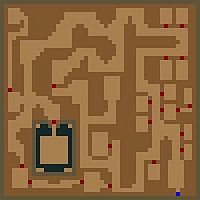