As usual, go to sleep and Ria Silmane will visit you. This time, she says:

"Tharn is livid, scattering about the Imperial Palace like a rabid dog. You have caused him no end of worry. I am sure the Wizard's minions are tracking you. I will say no more, lest I tempt Fate. You seek now the seventh piece of the Staff of Chaos. I have found that this piece lies in a place called Murkwood, the dark forest that ever moves. There can only be one of two provinces left that can hold this forest, Black Marsh or Morrowind. I would start my search in one of these..." 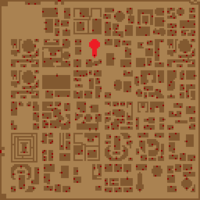 Asking around about Murkwood leads you eventually to the Conclave of Baal in Stormhold, Black Marsh. Its leader, Idolan Lancaster, tells you that one of their junior members cast a spell that destroyed the Vaults of Gemin, where there also happened to be a tablet that would reveal the location of Murkwood. When you agree to fetch the tablet, you get the location of the Vaults of Gemin on your map.

The Vaults of Gemin is a large, two-level dungeon located just southwest of Stormhold. You will find the usual assortment of monsters (hell hounds, homonculi, wraiths, and zombies on the first floor and homonculus, zombies, wraiths, and stone golems on the second floor). Bring lots of potions: heal true, resist fire and resist shock-potions, Levitation potions for second floor (or you'll be assaulted by stone golems). If you're a warrior you might have some use for Invisibility potions (they let you get close to most enemies without being noticed, so they can't damage you from a distance). Unfortunately, this dungeon is also quite empty, with very few treasures and few monsters who give loot.

On the first level, the way down (42,62) is more or less in the center of the dungeon. There are about eighty little rooms, though, and while it's not exactly a maze, the rooms don't have any obvious logic to how they connect. The fastest way down is to head east in the first east-west corridor, then take the first corridor south. Take the second door on the west, take two doors south and one door west, then loop back north around the west wall and go down.

The second level is flooded and contains islands of dryness, with bridges between them and rooms on them. The tablet (52,90) is in a room in the south center behind a riddle door ("Onion" is the answer). Beware of stone golems on the small islands and various distance fighters.

Return to the Conclave of Baal with the tablet so you can get the location of Murkwood on your map.

Like the Elden Grove, Murkwood is a hazy place with impenetrable hedgerows. There are some large open spaces, but not as many as in the Grove. This is the quickest dungeon to complete, though the monsters are harder to defeat. The monsters you can expect to meet on the surface include homonculi and a few wolves, with a fire daemon and medusa near the entrance to the second floor. The biggest problem are the medusa, because they come in couples and often apply the tactics where one beats you and the other paralyzes you. If you're a warrior, you want to try to hit them both. Be sure to bring some Potions of Free Action to cure the paralysis. As is typical of a harder dungeon, there is basically no treasure here.

The way down from the ground level is almost in the exact center of the map. However, it is inside a maze of vegetation that has awful monsters hiding around seemingly every corner. Your best bet to threading the maze is to refer to your map frequently to see if you are near the blue dot that signifies the way down. Also, some of the walls in the center maze are earthen, and it can be of some help to destroy them. Wind your way to the center and go down. The fire daemon is at the southwestern entrance to the maze in the center, and the medusa are in the northern part of the maze. If you want to avoid the medusa, you can use Passwall on the earth walls to access the entrance from the south, but avoiding them is not guaranteed.

You'll be faced with a riddle at the gate. The answer is "love."

The second level is the smallest dungeon in terms of exploration area. The Staff piece is down here behind a riddle door, as always. Answer incorrectly and you'll have to deal with a mess of iron golems, although if you are feeling confident you may want to deliberately get the riddle wrong in order to farm the iron golems for experience points. Answer correctly ("water") to receive the Staff piece (61,80).

Jagar Tharn will send you yet another vision and a minion. This time he is so confident that he just outright tells you where the last staff piece is:
"You amaze me with your tenacity. This game however, is at an end. As you may already know, the final piece of the Staff is in Dagoth-Ur, in the province of Morrowind. The information is useless to you, for none know the entrance to the volcano, and even if you survive the creatures I have sent against you now, you will not survive its depths. I bid you farewell, (PC name). You have been a most worthy opponent..."