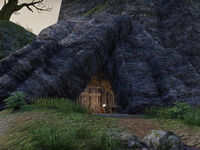 The Mines of Khuras (or simply Khuras) are an extensive abandoned mine complex located in the Cambray Hills region of Glenumbra in High Rock. The entrance lies on the coast east of Aldcroft, and the lower levels are flooded with lava.

In the late First Era, the mines were famous as a source of crystals and gems until a ceiling collapse rendered most of the tunnels inaccessible in 1E 2906.[1] The mines were subsequently abandoned. In 2E 582, the mines were taken over by the Bloodthorn Cult, who sought a certain type of gem for use in corrupting the Wyrd Tree.[2] Their leader, Lilou, was later killed.[3]

Circa 2E 582, Oracle Marieve of the Beldama Wyrd was targeted by the Court of Bedlam so that the cult could use her to discern the location of Artaeum. The oracle fled to an old Wyrd site within the Mines of Khuras, but was tracked down[4] by Daedra and captured. She managed to leave a cryptic note for Vanus Galerion with instructions on how to perform a ritual to contact her. The ritual was completed by the Vestige and the oracle was ultimately rescued from the clutches of Mephala before she was forced to reveal Artaeum's whereabouts.[5]

During the Imperial Simulacrum, a junior member of the Brotherhood of Seth from Camlorn named Brother Barnabas seemingly went mad after learning of Emperor Uriel Septim VII's imprisonment. Taking it upon himself to restore the Staff of Chaos and rescue the emperor, Barnabas took a map fragment that showed the location of the Crypt of Hearts and fled to Khuras. He was then killed by the monsters inhabiting the mines. When the Eternal Champion came in search of the staff piece hidden in the Crypt of Hearts, the Brotherhood revealed the fate of the map. The Champion then entered the mines and retrieved it.[6]