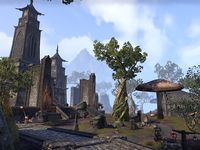 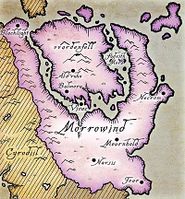 Narsis is one of the eight major cities on the mainland of Morrowind,[1] built in the verdant river basin of Deshaan. Laying on the rolling hills of the Redolent Loam, Narsis is the ancient capital of the former Great House of Hlaalu,[2] whose sphere of influence revolves around the world of mercantilism and adaptation. Through Narsis, they were able to acquire control throughout central Morrowind.[3] The city was one of the first settlements built by the followers of Veloth back in the Merethic Era, in which it was originally named, Narsis-Where-All-Fervently-Praise-the-Prophet-Veloth.[4] 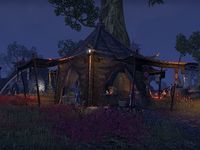 The Merchant Stalls of Narsis 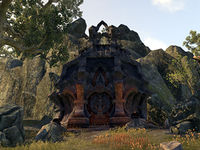 The Ruins of Old Narsis

Narsis is situated on the southeast shores of Lake Hlaalu, with the Velothi Mountains rising dramatically to the west.[5] Despite its status as a great house capital, Narsis is one of Morrowind's smaller cities. It is built on a hillock that overlooks the lakefront to the north, and at the top of it lies the local kinhouse. However, the hill has a stone foundation built around it, providing ample space around it and elevation above the rest of the settlement. The city is surrounded by low-barring walls and much of the landscape is uneven ground; as a countermeasure, these hills are surrounded by stone platforms like with the kinhouse. Even though Narsis is the capital of House Hlaalu, it does not feature their typical style of architecture, but rather the ornate stone style that is prevalent throughout central Morrowind.[6]

The center of town is quaint parkland with tall stalks of Emperor Parasols, sprawled out chanterelle mushrooms, vibrant red barberry bushes, and large sharp rocks. The city is known for its vibrant crimson peonies, which are made into vivid wreaths and fashioned into garden hats.[7] The west side of the city contains the local marketplace consisting of trader tents, and a lone watchtower can be found south of the town. In the town outskirts to the west lies the ruins of ancient Narsis, which runs underneath the modern city and includes the foundation of the original settlement.[4] Narsis is neighbored by several settlements, including Heimlyn Keep to the northwest, Old Keep to the northeast, and Black Marsh to the south towards Stormhold.[1]

Narsis was built in the Late-Middle Merethic Era in the wake of the great exodus of Veloth and the Chimer of Summerset. It was one of the original settlements created in the region and it was originally called Narsis-Where-All-Fervently-Praised-the-Prophet-Veloth.[4] When the alliance between the Chimer and the Dwemer, Indoril Nerevar amassed an army to assault the Dwemeri citadel at the pinnacle of Red Mountain. The armies were stationed in Narsis, until they moved north toward Vvardenfell to engage in battle. On their path, they came across the Nordic armies under Ash-King Wulfharth.[9] While the outcome is unknown, the Chimer forces managed to advance onto Vvardenfell and overwhelm the Dwarves on Red Mountain.[10] At some point in time, House Hlaalu established control over Narsis and it soon became their capital throughout their district in central Morrowind. They have ruled over the town since at least far back to the 121st year of the Golden Peace.[3]

The land south of Narsis was disputed greatly by House Hlaalu and the neighboring House Dres, which grew into full-scale house warfare in 2E 559. The former attempted to build an outpost in the region, but the latter went out of their way to prevent it. The Hlaalu Guard led by one, Purilla Falen protected the workers while Dres skirmishers attacked the outpost relentlessly. Falen defended the area through many waves of enemies, eventually waning out their ranks. She ordered a wizard to conjure a portal to Narsis while she fended off the invaders. Eventually, it was just Falen and a couple of guards. The workers even took arms from their fallen comrades in a vain attempt to defend their station. Finally, Hlaalu battle-merchants stormed the area from the portal and quickly driven out the Dres warriors. As they were retreating, Falen's throat was slit and died before a healer could help her. She has since been remembered for bravery and loyalty to House Hlaalu.[11] 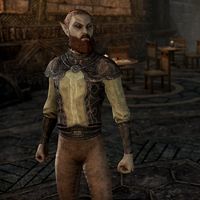 During the Interregnum in 2E 582, the Llodos Plague had started spreading throughout Deshaan and was en route to Narsis after an outbreak in Serkamora. It was originally developed by the alchemist, Merdyndril, but one of the Maulborn had managed to create a more potent strain of the disease, which was later dumped into the city's water supply and Lake Hlaalu.[12] Panic and paranoia had swept through Narsis as several people started to disappear in the middle of the night. Councilor Ralden was having trouble deciding on a proper course of action, to which his advisor, Giron Sadri offered to investigate in the situation and suggested to close the city off from the outside, even if it may harm Narsis' economy. The Councilor enlisted the help of an agent of the Ebonheart Pact to undergo their own investigation, which later involved the Morag Tong.[13]

Their search brought them to the Maulborn camps on the lake, where the Tong agent, Naryu Virian revealed Sadri's true intentions and his involvement with the Maulborn.[14] At some point, the remaining citizens attempted to rally up and search the missing people, but it is unknown whether that amounted to anything. The agent defeated Councilor Sadri in the city ruins and was able to rescue the captured villagers along with Councilor Ralden. The situation in Narsis had subsided and the Agent was tasked with helping the Hlaalu raid at the Obsidian Gorge.[15]

In the latter years of the Second Era, all able-bodies were called throughout Morrowind to fight against the vast armies of Tiber Septim and his burgeoning Third Empire, but out of all the Great Houses, the Dunmer of House Hlaalu proposed accommodations to the invading forces. In any case, the Armistice was willingly signed by Morrowind, making it a province of the Third Empire.[16] An Imperial Proconsul was instilled into the city of Narsis and set to govern Morrowind, however, the common-folk felt that they were out of touch with Morrowind's inner workings and that they have no real power over the province.[UOL 1] In 3E 80, the daughter of Emperor Uriel Septim II, Galana was set to marry the Duke of Narsis, despite being arranged for the King of Solitude, Mantiarco. In her stead was the then thirteen year old, Potema Septim.[17] During the Imperial Simulacrum to the late-Third Era, the city-state of Narsis was an active settlement. It was ruled by Queen Vermothah and had a rivalry with Mournhold.[18]