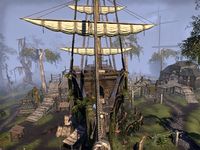 Alten Corimont is a small port town located in eastern Shadowfen, deep in the province of Black Marsh. It lies on the bank of a waterway, which provides access to the sea.

Circa 1E 2260, Argonian freebooters from Alten Corimont were among those who heeded the call to arms of Baron-Admiral Bendu Olo of Anvil and joined the All Flags Navy. The sailing ship Golden Era was one such vessel. The Argonians sailed with the fleet to far-off Thras to seek vengeance against the Sload, never to return. Unbeknownst to the inhabitants of Alten Corimont—and indeed most of Tamriel—much of the fleet was pulled into the depths of Coldharbour by the collapse of the Coral Tower. The captain of the Golden Era made a pact with Molag Bal, receiving the Crown of Bones and ruling over the skeletal sailors for eternity.[1]

In 2E 582, Alten Corimont was little more than a glorified tavern. Aside from the docks, its only structure was a beached ship that functioned as a social hub for the settlement's population of pirates and smugglers. Despite this, both the Mages Guild and Fighters Guild maintained a presence. The town was run by an Argonian pirate called Captain One-Eye. Due to its nefarious activities, the town remained neutral in the ongoing Alliance War. It was for this reason that the Aldmeri Dominion chose Alten Corimont to help resupply their invasion of the region. A crew of Renrijra Maor were put in charge of this operation, but the group's suspicious activities were soon noticed by One-Eye, who had their leader killed. The Khajiiti pirates promptly switched their allegiance, and helped One-Eye obtain the Dominion's treasure, killing a part of their invasion force in the process. The settlement's relationship with the Ebonheart Pact remained bitter, although Pact ships were allowed to make use of the port.[2]

Later that year, after subduing various challengers who questioned her right to rule, Captain One-Eye decided to assemble a fleet and sail to Thras in search of those ancestors who had departed Alten Corimont with the All Flags Navy. Instead, she fell victim to the same whirlpool that the Coral Tower had created (probably the Maelstrom of Bal in the Abecean Sea). Although the rest of her crew fell victim to the horrors of Coldharbour, One-Eye survived and managed to uncover the story of the Lost Fleet and recover the Crown of Bones with the help of the Vestige. It is unknown if One-Eye claimed the Crown for herself or returned to Alten Corimont.[2]

By the time of the Imperial Simulacrum, Alten Corimont had grown to become a small town. It was ruled by Lord Tibius, and it had a rivalry with Rockpoint.[3] It was neighbored by several settlements, including Chasecreek in the northeast, Riverwalk in the east, Rockpoint in the southeast, and Tenmar Wall in the west.[4]