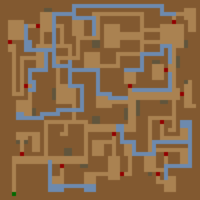 Your starting point: The Imperial Dungeons (The green dot is the shift gate)

First you see a cutscene in which the ethereal form, Ria Silmane, appears to you in your dream. She will tell you of how she died and how you are now the only person she can send on this quest.

"Do not fear for it is I, Ria Silmane. (Player's name), listen to me, there are no others left to carry on this fight. You have been left in this cell to die. Jagar Tharn, Imperial Battlemage of Tamriel has taken on the guise of the true Emperor. He does not see you as a threat, being only a minor part of the Imperial Court. In that act of arrogance, he has made his first mistake. Look to the north wall of this cell. You will find a ruby key which will unlock the door. Take it and make your escape. The passages here were once used by Tharn to hide treasures he had stolen from the Emperor's coffers. If you wish, you can gather enough to support yourself away from the Imperial Seat. Be careful, there are many creatures which inhabit the sewers now, vile rats and goblins."

"It is too late for me, for I am already dead. Only my powers as a Sorceress keep me between this life and the next. That power however is waning. Do not succumb to greed or you may find these tunnels to be your final resting place as well. I can still work my magic to a certain extent. If you travel west from this cell, then south, you will find a Shift Gate. It will transport you far enough from the center of the Empire that you should be safe. If you survive these sewers you will see me again. Remember, (Player's name), Tharn has taken on the guise of the Emperor. No one will gainsay his word for yours. I will come to you again in your dreams, so it is imperative that you rest from time to time. In that way I will be able to communicate with you and lend my aid. You are entering a dangerous arena, my friend, one in which the players are beings beyond your mortal comprehension. I do not envy your role. There is however a power within you as yet untapped. Look for me when you have gained experience in the world. You are my last and best hope."

When the cutscene ends, you will find yourself in a locked jail cell. There is a ruby key at the far corner of the cell on a raised platform (3,19). The key can be a little difficult to pick up. Make sure your cursor is right on top of it and that there is nothing else in the way. If that fails, move around a bit and try again. Try to keep the position of the key in the center of your screen. Once you have the key, use it to open the cell door (4,21).

Those were the directions Ria Silmane gave you. As you exit your cell, you will see a pile of loot. Click on the pile. It is a standard treasure pile, one that you will see in nearly every dungeon. It contains a random amount of gold and some random equipment. Before you move on, go into your inventory and equip any weapon that you currently have and are able to use. Here, you can either run for the exit, or explore further. The creatures that can be found here are goblins, rats, thieves, and sometimes even lizard men, but there is quite a lot of loot. You will not be able to return here once you pass through the Shift Gate. If you do want to make a run for it, simply keep going west, then turn south, then west, then south, (and so on) until you reach the Shift Gate.

As you run down the final long and narrow corridor, you will see a glowing, blue-rimmed Shift Gate. Once you reach it, you will be asked a question. You must get it right to exit the prison and be teleported to a different city. The question will look like this: What is the spellcasting cost of __________? where the blank is filled by a random spell. Originally, you were supposed to look in the Arena Manual that came with the box to find the correct answer; see the notes for how to access the answers. When you answer it correctly, you will be teleported to a random city in the province your character hails from. Congratulations! You have escaped!

Note: If you don't have the floppy disc version of Arena (version of Arena without voice acted cutscenes for Ria Silmane, Jagar Tharn, etc. as well as many other minor changes) then you will not be asked any questions. You can simply step through the shift gate and you will be transported to your home province.