The UESPWiki – Your source for The Elder Scrolls since 1995
< Elder Scrolls Online: Public Test Server
Jump to: navigation, search

The Elder Scrolls Online v2.5.1 is our first incremental patch on the PTS for Update 11 and the Shadows of the Hist DLC game pack. It addresses a number of issues with the new content and systems as well as introducing three new features that were missing in the initial PTS launch. This incremental patch also includes some fixes in the base game patch for quests, itemization, crafting, and more. We've also updated the existing character templates to include the six new dungeon item sets, two new Monster Mask sets (Velidreth and Haj Mota), and updated Trials and Dragonstar Arena item sets and Master Weapons.The size of this patch is approximately 640MB.

Thanks to everyone for your feedback and bug reports so far! We've been reading your forum threads and posts, and look forward to seeing what you think of this latest patch and the new features!

Equipment looted while in a group can now be traded to active group members for two hours after being looted. 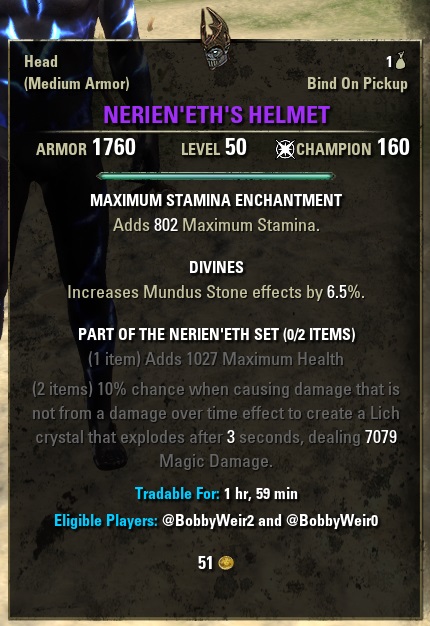 You will soon have the opportunity to purchase consumable Dye Stamps from the Crown Store.

(Note: Rare dyes unlocked from achievements are not available on dye stamps, however other colors, unavailable as Dyes, may be.)

Find the Crow Caller to Herald the Witches Festival![edit]

For a short time, players can petition a Witchmother for her boon! But does it come with a price?

Shadows of the Hist Fixes & Improvements[edit]