Easter Eggs are secrets that the developers put in the game to give people a laugh when they find them. Elder Scrolls Online has a large number of such jokes. Easter Eggs differ from in-game references in that they have been intentionally hidden from the player and are unusual with regards to their surroundings.

If you think you have found an Easter egg or reference, please post your idea on this article's talk page before adding it to this article.

First Church of the Holy Sweetroll[edit] 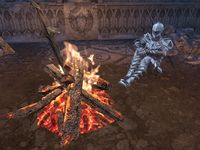 The Bonfire in the Crystal Tower

During the tutorial on the Isle of Balfiera (in the room where you choose your weapon), you can look into a cell to find a knight's spirit beside a bonfire with an Ancestral High Elf Style sword in it. This is a reference to the bonfires from Dark Souls, which allow you to rest, fast travel and level up your character. The knight is wearing heavy armor in the Nighthollow Style, granting him some resemblance to the warrior from the game's promotional material.

I Should Buy a Boat Cat[edit]

The Legend of Zelda: Ocarina of Time[edit]

Over the Hills and Far Away[edit]