The UESPWiki – Your source for The Elder Scrolls since 1995
< Online: Places: Murkmire / Towns
Jump to: navigation, search 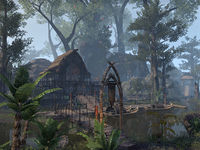 Bright-Throat Village is a settlement found in the eastern shore of Murkmire. It is home to the influential Bright-Throat tribe who are known for their diplomatic skill and artisanship.

Haj Mota and River Trolls stalk the nearby rivers. Hoarvors scuttle among the roots on a hill north of the village, near the Glade of Chimes. Hackwings linger on ledges close to the village and its uxith.

Bright-Throat Wayshrine can be found just south of the village.

This Online-related article is a stub. You can help by expanding it.
Retrieved from "https://en.uesp.net/w/index.php?title=Online:Bright-Throat_Village&oldid=2121892"
Categories:
Hidden categories: