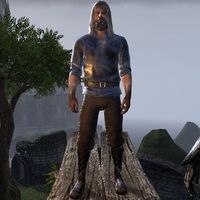 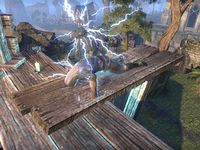 Rufinus trapped by his own lightning

Rufinus is a Colovian drunkard found in Southpoint. Along with the majority of the populace, he has been cursed by Sheogorath. This has driven him insane and cursed him with powerful lightning powers. He is responsible for the random lightning strikes that block entrance to Daraneth's laboratory. You are given the option to either kill him, or talk him out of his attacks using Persuasive Will. If you calm him down, he will later be encountered in the Cathedral of the Golden Path, where he will help you fight your way through the dungeon. He attacks with his fists, which deals shock damage to enemies.

As you try to reach the top of the tower, you'll hear him shouting at the villagers below.

"What are you doing here? I don't know you."
Are you causing all of this?
"So what if I am? They called me an angry drunk, said I'd never amount to anything. But now I have the lightning, and I'll give it to anyone who makes me mad!
Shut your mouth and walk away, or you'll get the lightning. Just like all the others. "
You need to end this storm
"I don't need to listen to this. I'll show you, like I did them. Nobody pushes Rufinus around!"

<Push him over the edge> [Rufinus dies]

Rufinus falls off the plank and dies once he hits the ground.

Be reasonable. We can discuss this.
"Think you can talk down to me? I'll roast you on a lightning spit!
Your lungs will fry so fast they pop like kernels in a skillet. I'll make your eyes burst out of your face! You aren't better than me!"
[Persuade] It sounds like the person you're angriest with is yourself. [Rufinus lives]
"What are you talking about?"
You're angry because you blame others for your own failings. You hate the person you've become.

He turns and thanks you.

Rufinus: "You're right! You're absolutely right! I pushed everyone away, and then hated them for leaving me behind! Thank you for helping me realize I'm the source of my own problems!"
Rufinus is then struck by lightning, falling to the floor and held there by an electrical charge.

You'll find him in the catacombs if you let him live.

"Just kill me, you crazy freak.
Wait, you're not him. You aren't dancing. Who are you?"
We met in the tower. You were struck by lightning.
"I did? I had had a few drinks, and then I must've blacked out.
Woke up here a while ago. Tried to sleep, but I kept dreaming of the same man. Wouldn't stop dancing."
Are you all right?
"Can't sleep, or the man dances. I don't want to dance with him.
I'm coming with you."
Are you certain? I'm headed to stop Mayor Aulus.
"Good. Still have a bit of lightning inside me. I'll help you get to him, so we can bash his face in."
All right. Follow me.

If you speak with him again:

"Don't worry about me. We should keep moving. Can't stop moving."

After the two of you see Sheogorath, he'll remark:

Rufinus: "Is my ear bleeding? Everything seems bright … this can't be good."

And just before confronting the mayor, he'll say:

With those last words, Rufinus expires on the floor boards.