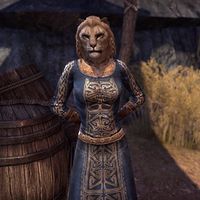 Feluni is the Khajiit owner of Thizzrini Arena. She will accept your entry after you prove yourself against one member from each of the three divisions of Summoner, Sorcerer, and Swordmaster. She will also give you your stage name for the Arena, which is "Mysterious Stranger".

After progressing through each division, you must return to her to start the next one. Once you have beaten all three division's champions, you must talk to Ishalga and Feluni to arrange a fight for the title of Grand Champion.

A Foot in the Door[edit]

Earn certification in all three divisions and she'll agree to talk to you:

"Who is this, now? A paying customer, here to cheer on the combatants? Or are you something more?"
I'd like to compete.
"Admirable. But there are rules regarding new entrants. Certain credentials are required."
I've earned credentials for all three divisions.
"You come prepared! Ambitious and resourceful. How refreshing!
Very well. Have you a stage name?"
My name is <Character Name>.
"That won't do! Stage names must evoke mystery and intrigue. They should have a dramatic flair! Hmm. How does this sound?
From parts unknown, comes the enigmatic, the inscrutable, the dangerous … Mysterious Stranger! Yes, I like that. You're in."
What should I do next?
"What else? It's time to fight! You have the credentials, so you've already met the division champions. Now you must fight through the ranks of their divisions.
Survive that and you'll face the Grand Champion. But first things first. Get moving now."

"May the light of Jone and Jode bring you luck in the Division Arenas, my friend."
Can I compete in the Sorcerer Division now?
"Everything seems to be in order. Report to Malarel at the Sorcerer's Arena when you're ready to begin.
Best of luck to you."

"May the light of Jone and Jode bring you luck in the Division Arenas, my friend."

Once you make it to the main arena, Feluni will be your announcer:

Feluni: "Welcome to the Final Rounds of the Sorcerer Division Championship!"
Feluni: "Presenting our challenger, from parts unknown! The enigmatic, the inscrutable, the dangerous … Mysterious Stranger!"
Feluni: "And our first combatant, a merciless mage with the power of ice magic at his fingertips, accompanied by a calculating cadre of cunning companions!"
Feluni: "May I present … Irgun the Icemage!"
Feluni: "Let the battle begin!"

Feluni: "Irgun has been defeated!"
Feluni: "Now on to our final round!"
Feluni: "And now, the scintillating sorceress from Solitude!"
Feluni: "The magical maelstrom of malevolence!"
Feluni: "Our very own … Malarel the Magnificent!"

Defeat Malarel and Ishalga and she'll declare you the victor:

Feluni: "And the new champion of the Sorcerer Division is … the Mysterious Stranger!"
Feluni: "If you'll follow me, I'll give you your prize."

"Congratulations, Mysterious Stranger. You are the Sorcerer Division Champion!"
Thank you, Feluni.
"You have one title under your belt. Gain the other two division titles and you'll have the chance to unseat Ishalga, our Grand Champion. May the luck of Baan Dar continue to follow you."

Before starting the quests, she'll only tell you:

"You must acquire the proper credentials if you want to compete. Speak to my staff if you're interested."

After completing the objective:

"Can you hear the crowds? They still chant your name! They thirst to see more of you, Grand Champion!"

This Online-related article is a stub. You can help by expanding it.
Retrieved from "https://en.uesp.net/w/index.php?title=Online:Feluni&oldid=2201122"
Categories:
Hidden categories: