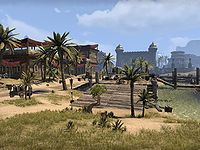 Port Hunding is a city at the center of Stros M'Kai. The place is rife with corruption, ruled by the ruthless Headman Bhosek and his Bloody Fists. His palace lies to the north, accessible via a bridge in the center of town. The local tavern, the Screaming Mermaid, lies at the far southeast side of town.

There is a single dreugh and a chest under the northeastern bridge, which follows the road east out of town, away from the Screaming Mermaid. The Last Will of Roland Volcy is located in a bottle on the beach south of Brews by Candariel. 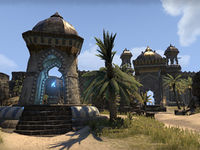 Port Hunding Wayshrine is located outside the walls to the west of the city, east of Bthzark on the road to Saintsport and Rash Merchant's Plummet. It is unlocked as soon as you arrive on Stros M'Kai., and its Discovery XP is added to that of Port Hunding. 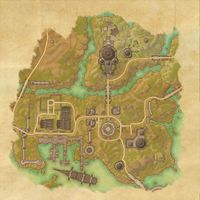 A map of Port Hunding