Online: Down the Skeever Hole

With the Colovians removed from the village, Captain Odreth has planned a counterattack with his Rangers. We are to use a secret tunnel to gain access to the Colovian camp and take them out. 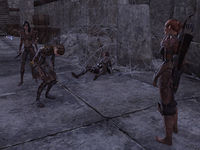 Captain Odreth plans to use Ayleid tunnels to get behind the Colovian front lines. Meet up with Sergeant Herdor just outside the tunnel entrance. She looks forward to starting the counterattack and beckons you to follow her into the tunnels.

As you enter the tunnels with Herdor she rallies the Vinedusk Rangers that are waiting inside. She then tells you to collect some alchemical mixture from a nearby crate and follow her to scout ahead. Follow her and you will find Herdor and Glooredel interrogating an Imperial prisoner about the Colovian leaders. Since the prisoner is initially resisting to give any information, Herdor needs you to convince the prisoner to start talking. You need to set fire to crates filled with kindlepitch—if the prisoner still doesn't talk then she will slowly die as the fire spreads from crate to crate. Start by setting fire to the first crate on the right. Frightened already, the Imperial captive tells Herdor everything. Glooredel then kills her, saying, "You've earned this."

The Vinedusk Rangers will destroy the camp, while you attack the Colovian commander Festius and his aides. If you rescued the villagers during previous quest, Herdor gives you Ranger Rally Horn to summon reinforcements when needed.[verification needed — Only get the horn after having rescued the villagers, or always?] 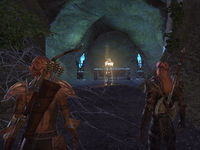 You must burn seven Colovian tents, crates and siege weapons in order to create chaos. If you want to use the Ranger Rally Horn, it will summon two Vinedusk Rangers that will attack the nearby enemies. Next, head south to Nendaer's tomb to defeat the enemy command unit. Colonel Festius with his aides Crispus and Sabina are waiting inside the tomb. Festius uses a restoration staff and a shock staff, and his aides use a two-handed mace (Sabina) and a shock staff (Crispus).

After you have defeated the enemies, Captain Odreth and Herdor join you inside the tomb and head to the inner chamber to check on Nendaer's remains. As you join them in the tomb you get to witness a short conversation between the spirit of Nendaer and Odreth. You can then talk to Odreth for your reward.