The UESPWiki – Your source for The Elder Scrolls since 1995
< Elder Scrolls Online: Quests: Ebonheart Pact / Eastmarch
Jump to: navigation, search

The Dreamwalker is lost in King Jorunn's nightmares. I must enter the Dreamstride and try to rescue both of them before the Daedric poison kills the King.

"I can't imagine what awaits you in the dreams of King Jorunn. His dreams turn to nightmares. What once was pleasant now is twisted and dark. You must help him overcome these trials."—High Priest Esling

The high priest says you must pray to the Three Old Gods. Each will help you, but in a different way. You will be facing the king's greatest fears and worst memories: the death of his sister, the soldiers in his service and Fildgor. You need to show the king that his soldiers gave their lives because they loved and believed in him.

Praying at a totem sends you to Mistwatch Crevasse. The animal you choose will physically accompany you, even helping you defeat enemies. Pray at one of the three totems and accept the aid of the Aspect of the Wolf, Bear or Fox.

You have to pray at a totem again. 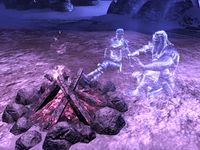 Jorunn and Nurnhilde talk by the fire

This part of Mistwatch Crevasse is cold and icy. Talk to the Fractured Spirit of King Jorunn by the fire. This is the memory of a cave he and Nurnhilde fell into when hunting. They almost froze to death, but his sister saved them. However, he blacked out and never saw the exit. He remembers the fires were key. The spirit of the Fox is helpful for this trial.

You need to run quickly from one fire to the next because you start to freeze if you are away from the fire for too long. The quest markers lead you to the next fire. New fires show memories of Nurnhilde and Jorunn.

Southeast of the final fire, the Dream Eater holds another fragment of Jorunn's soul.

Talk to the high priest again. The king's dreams will try to deceive him now. This time if you cannot convince the king what he sees is a lie he will die, and so will you.

In the final dream, talk to Stormy-Eyes, the Dreamwalker. He says the king followed a pretty young woman up the steps, then specters appeared. 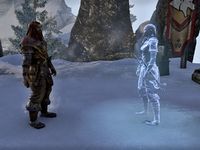 At the top of the stairs, the Dream Eater has the final fragment of Jorunn's soul. Defeat him and talk to Jorunn. He doesn't quite remember you but agrees to leave. After you finish talking to him, Queen Nurnhilde's spirit appears and talks to her brother. She says Fildgor merged her spirit with his own, so he might be recognized as the rightful king.

Return to Mistwatch and talk to the king, who is now standing up.

"I can never repay you for what you've done. I should throw a grand feast and make you part of my personal guard, but there are still dangers to deal with."—King Jorunn

Fildgor believes that with Nurnhilde's spirit he would be able to wear the Crown of Freydis, which won't fit on an unworthy head. If Fildgor is able to wear the crown, Jorunn will be unable to challenge him. He says Fildgor and some Stormfists went to the Skuldafn dragon shrine, so he and the prince will set up camp at the base of the mountain there to plan a counterattack.

This Elder Scrolls Online-related article is a stub. You can help by expanding it.
Retrieved from "https://en.uesp.net/w/index.php?title=Online:Gods_Save_the_King&oldid=1946757"
Categories:
Hidden categories: