The UESPWiki – Your source for The Elder Scrolls since 1995
< Elder Scrolls Online: People(Redirected from Online:Fildgor)
Jump to: navigation, search 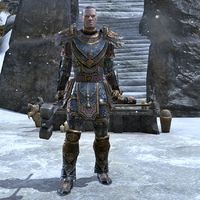 Fildgor Orcthane, formerly known as Fildgor Strong-Prince, is a Nord Thundermaul and the exiled twin brother of Jorunn the Skald-King. Backed by an army of Orcs and the Stormfist Clan, he has returned to Skyrim in a campaign to overthrow Jorunn.

He is found in Sovngarde at Skuldafn, where he desecrates the body of his older sister, Queen Nurnhilde, to be accepted by the Crown of Freydis.

More information can be found on the lore page.

After exiting the Royal Tomb, you can hear him speaking with Shukul gro-Agluk while escaping with his sister's corpse.

When he notices you, he will yell at you.

Fildgor Orcthane: "You! You've been a thorn in my side for too long. Come then, interloper. Come and die!"

At around half health, he calls the Spirits of Sovngarde to assist him:

Fildgor Orcthane: "I will not be denied! Spirits of Sovngarde, answer the call of the rightful King of Skyrim!"

Fildgor Orcthane: "No! It can't end like this. I can't be defeated! Not again!"

"You beat me. I lose to my cursed brother. Again. Perhaps he is the better ruler.
Regardless, in front of my ancestors and my sister, I am undone. Do what you will with me."
You surrender?
"What choice do I have? Even with Sovngarde's power to aid me, I lost. The Crown of Freydis rejects me. The thorn in my side became my undoing.
You've won. What will you do with me now?"

It's not my place to judge. Jorunn the Skald-King will decide your fate.

Fildgor Orcthane: "I will bring the Crown of Freydis to my brother. Don't worry, I give you my word that this is finished."

Pray that your ancestors forgive you. You die here and now.

If you chose to spare him, there will be another choice and more dialogue.

If you allow King Jorunn to execute Fildgor:

If you have Jorunn spare Fildgor:

Jorunn the Skald-King: "Such a shrewd, calculating proposal. It's not the Nord way, but the idea has merit. If we could make him work for us, think of what we could accomplish. And, I confess, it would break my heart to put my brother to death. Thank you for your counsel." 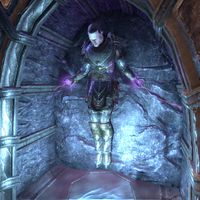 If you chose to kill Fildgor, he will appear in Heart's Grief.

"Ah … my brother's keeper. Here to taunt me in death as you did in life?"
I'm just here to look.
"Get out of my sight, mewling cow. You chose my milk-drinker of a brother, ended my quest for rule. And now the Prince has me, all for breaking the bonds of brotherhood. Go!"

If you choose to free him, he is attacked by two Orcthane Berserkers, who beat him until he dies a second death.