Replica of the Mnemic Egg

The Mnemic Egg is an Argonian relic that can act as the physical link between the Argonians and the Hist. It is a sacred symbol of birth and life, containing the memories and wisdom of the Hist.[1] The Mnemic Egg takes the form of a mortal-sized seed infused with Hist sap, which visibly flows and pulsates throughout the Egg.

When a Hist tree dies, the death is described as the tree being "born backwards."[2] That is to say, the death of a Hist creates a Mnemic Egg. The memories of that Hist and its Argonians are all contained within the Mnemic Egg.[3] The Hist share a collective consciousness; they have the ability to communicate with one another, and to feel what another Hist is feeling. As a result of the Hist's shared connection, and the fact that the Mnemic Egg is a physical vessel for all of the memories of the dead Hist that birthed it, the Mnemic Egg can be used as a gateway into the collective consciousness of all Hist Trees. This also means that in the wrong hands, a Mnemic Egg can be used to sever the Argonian connection to the Hist.

During the Interregnum, forces from the First Aldmeri Dominion lead by the alchemist Ruuvitar drained the sap from several Hist trees throughout Shadowfen. They boiled the sap, then used it to steal the memories of those whom Dominion agents murdered in an act known as "skin-stealing."[4] Using their skin-stealing technique to steal the memories of the Ebonheart Pact's Nord Vicecanon and having an agent take his place in the city of Stormhold,[4] the Dominion took over the nursery of Shadowfen's Argonians, known as the Hatching Pools, thinking the place crucial to their plans.[5]

The Dominion killed the Hist of Duskwallow Hamlet,[6][7] a small settlement in eastern Shadowfen. This event sparked the creation of a Mnemic Egg, which Ruuvitar took to the Ayleid ruin of Loriasel. He then used the Egg to sever the Argonians' connection with the Hist. This event was catalyzed by the Hatching Ritual at the Hatching Pools, which the Dominion sabotaged. Ebonheart Pact agents and Argonian midwives rushed to save the eggs beneath the great Hist from returning to the Void. The Dominion's interference rendered the Hist unable to influence the eggs, and without the direction or purpose provided by the Hist, the eggs would return to Sithis unless they were salvaged from the nests.[3] The Dominion lingered at the pools long enough to wait for the ritual to happen, as they wanted to see if the Mnemic Egg was actually capable of severing the Argonian-Hist link. Once it became clear that the ritual was a disaster and the link between the Hist and Argonians was broken, the Dominion began slaughtering the Keepers of the Shell, then moved for Loriasel. As long as the Mnemic Egg remained in the Dominion's possession, no Argonian eggs could hatch.[8] 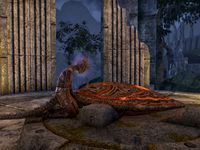 After the disaster at the Hatching Pools, the Vestige entered Loriasel, killed the alchemist Ruuvitar, and recovered the Mnemic Egg alongside Vicenanon Heita-Meen. The alchemist's vile experiments on the Egg left lasting scars in its psyche, and the Hist was in great pain. The hero and the vicecanon entered the consciousness of the Hist within the Mnemic Egg, fixed the damage done to the Hist, and restored the Argonians' connection to the Hist.[9]

Some time after the events in Shadowfen, the Mnemic Egg was brought to Skuldafn after the defeat of Fildgor Orcthane. There, Argonian representative Eyes-of-Steel presented the Mnemic Egg before the Pact at the Great Moot, and the Ebonheart Pact was sealed.[10]