The UESPWiki – Your source for The Elder Scrolls since 1995
< Blades
Jump to: navigation, search

Easter eggs are secrets that the developers put in games to give people a laugh when they find them (provided that they understand the joke or reference). Easter eggs differ from in-game references in that they have been clearly hidden from the player and are unusual with regards to their surroundings; references are often integrated into the rest of game and no attempt is made to keep them secret. 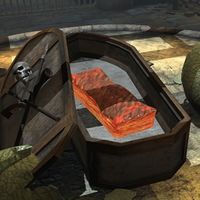